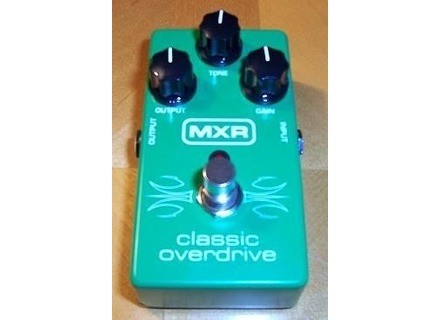 « Budget version of the Distortion III; at this price it's a no-brainer! »

View other reviews for this product:
The limited run MXR M-86 Classic Distortion is a budget version of the company's popular Distortion III pedal, only this one is manufactured overseas and uses lower grade components. It has the same basic circuit though, and sounds very similar. The housing is different than the III as well, as this one is housed in a black matte finished box with a "tramp stamp" as someone so elegantly put it on another website. This pedal was sold exclusively at Guitar Center stores along with the Classic Overdrive (a budget version of the MXR Custom Shop GT-OD), and some locations still have new units.

This dirt box has the typical three knob layout and a single switch that engages the effect. It can be powered by a 9 volt battery or common 9 volt AC adapter.

I have read that the unit is wired to be "true hardwire-bypass", but I'm not certain that that's the same as actual true-bypass in higher quality pedals. I'll look into that to confirm it, and update my review when I find out.

The Classic Distortion is quite simple to operate. It is very easy to dial in a nice musical tone with pretty much any rig.

Compared to several other MXR or similar pedals that cost over $100, this thing holds its own...compared to other pedals costing $39.99, this thing sounds amazing!!! I was pleasantly surprised upon first plugging in to this unit. For a budget overdrive, it really sounds warm and musical.

I wouldn't really call this a distortion pedal. Its range of gain, and the fact that it's so smooth and compressed land it in the overdrive realm, at least to me. It has a little more gain on tap than say, a tube screamer, but when I hear the word Distortion, I think of crunchy and abrasive gain, and lots of it. The Classic Distortion stays warm and smooth in most settings, that is unless you crank the tone control all the way up. Doing so creates a slightly unnatural character in the gain and the tone becomes a bit dirty.

In fact, like many other MXR overdrive and distortion units, this pedal has what I consider to be an MXR trademark; a somewhat dirty sounding low end that when palm muted emits a rubbery or elastic feel, and not "woody" like some other boutique boxes (like the Lovepedal Eternity, or BB pre)
That's not to say it's a bad thing, I just associate most MXR dirt boxes with that dry and dirty boxy low end sound. It feels like you're playing a pedal, and has a slightly artificial quality to it.

All that said, this pedal is still a blast to play leads on, and that's where it excels. What it lacks as a rhythm drive unit, it makes up for by providing warm, singing and compressed lead lines that make the guitar "play itself".
Throw an analog delay in the chain after the Classic Dist. and you've got a singing tone that sustains for days!

Backing the gain way down provided a decent mild overdrive sound, but the heavy compression was always present and the gain didn't clean up to allow any subtleties of my playing to shine through. A Lovepedal Eternity in comparison is much more organic and clean, with less compression and is much more amp-like with a woody feel.

This pedal is capable of several good tones and if you don't currently have a good overdrive or distortion unit, it will fill that void nicely. I highly suggest grabbing the Classic Distortion. It doesn't do everything extremely well, but it excels at nailing a singing compressed lead tone, and for that alone it's easily worth the $39.99 it costs. At that price it's a no-brainer! Oh yeah, grab the Classic Overdrive while you're at it