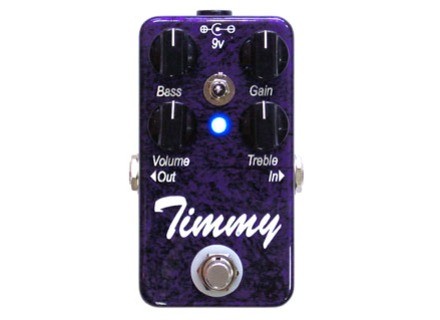 
Usability:
Not your standard tubescreamer type pedal. For a start, the controls are laid out in a…lets say unique way. The gain and volume knobs are standard, with top gain fully clockwise. On the other hand, volume and bass are completely attenuated when fully clockwise, so it takes a little while to get used to them.
The three way switch is located on the outside of the V2 Timmy, which controls the clipping circuit. According to Paul, select the top one for asymmetrical clipping and the bottom two for symmetrical clipping. The middle toggle is also louder for some reason.

Sound:
The remarkable thing about this pedal is the extent to which it is almost totally transparent, and doesn’t really color your tone. You can really tell, when used alongside other OD pedals the extent to which they introduce a mids hump by comparison. It really just sounds as your amp would if you were pushing it hard. Because of this, it doesn’t really work as a boost to push you through the mix or tighten up a high gain amp.
The Timmy is a low to mid gain OD pedal, so don’t expect it to do any high clipping. It’s a pretty smooth OD sound, but can be pretty versatile between the tone controls and clipping options.

Overall:
Really just an incredibly transparent smooth OD pedals that does great things at the low to mid gain threshold. That said, it isn’t for everyone and may not work with every setup. Paul is the first to state up front that it is not the be all and end all of OD pedals. These aren’t the easiest to get a hold of with a waiting list around 8 months. That said, if you do buy the pedal new, Paul prices it incredibly low compared to pedals of similar quality and prestige at $129 including shipping, and 1 week trial, so it’s well worth getting on the waiting list to see if it works for your setup, the ebay used prices are stupidly high. Paul can be reached on his Myspace, and can take a while to get back to you if you email, but is one of the nicest guys on the boutique pedal circuit, and highly dependable.