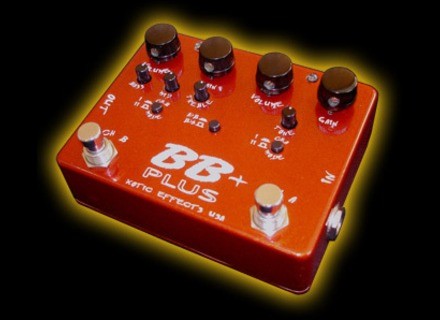 Buy this productView price information >
View other reviews for this product:
Two distortion in a box, not too heavy, the other more fat. That's all the transistor, but it sounds.
A jack IN OUT jack, a power supply if one is reluctant to batteries of all types and basta, it's ready!
The cabinet looks solid and the buttons are readable, especially the two diodes of different colors that triggers channel A or channel B. rhhho the beautiful blue and red whouaaaa beautiful!!
Ah yes, you can chain the two channels in the direction A => B or B direction => A. Obviously, it makes different sounds.
3 types of sounds underfoot so: channel A, channel B, channel A + B / B + A. If you can not find it with your happiness, move on.
For those who are not very impressed by the sound of the pedal, they can always convert the package to blue light / red light, tes is beautiful! If so.

Simple config, everything is said and legible. A textbook, there was a manual?
hahaha but what is it a distortion, a manual?

The sound is good.
Effects of distortion quite effective, the lightest fattest: the knobs are fairly progressive long as you want to play well on both tracks and with the gain and volume knobs.
Although we recognize the notes being played, it falls outside the spray sound, it remains clear enough without adding too much of any medium will be a TS. Moreover, test comparison, you'll see.
That said, if you want to emphasize frequencies is possible: there are tiny little button but make a huge change in tone. And I speak not of switches called compressor, which also affect the rendering.
And I'm talking about the possibility to chain the two channels in the direction we want even more flexibility on the impact potentiometers.
In short, it was enough to spend the night in search of sounds, as far as we are often really good.

My use without take my head:
Clear channel on the amp:
- Overdrive provides color very gradual, from a neutral to a great crunch with a color rather Marshall, I think.
- The distortion is much more violent, with little loss of definition still very manageable. The more we grow, the more one goes towards the big sound, but still rock typed. Attention to the tone knobs, it really changes the rendering of the beast
On the drive channel of the amp:
- Overdrive boosts well saturation (generous enough) to my amp. I use for solos
- The distortion does not bring me anything, personally. With distortion of the amp, for me it is too. Only real use very valuable in this setting: use them in boost. It allows the gain to zero, we push the level. Again for solos.

In short, I use it mostly on the clean channel of my amp, to give color to my Marshall sound. Here I use both channels of the pedal separately, or in series with the distal rather as a booster.
On the overdrive channel of the amp, I use it mostly boost.
But I must say that an amp that already provides many of the saturations. And that, I have two lethal weapons to vary the sound made: a 5-band equalizer in the amp, footswitch, and I added in the loop in an equalizer 10 band pedal foot control also , so.
Anything with that, I can boost the medium (it's time to solo!) Or dig them (it's time for big hairy rhythmic!), Two strokes tap.
Multiply that with the possibilities of Xotic, you get a scratch filled.
Finally, for now: the quest of sound is a grail. This is not the outcome that matters is the way!

Boiboite good, fairly expensive but when you love it not count.
I was looking for something to change the sound of our rehearsal amp, very distinctive because Vox and well it really works. We will not Marshall or Mesa with that, but we will approach the sound of these amps (Marshall seems to me more anyway). On my Mesa, it adds variety, and it combines well clear as to saturax sounds lighter or hairy.

It's expensive as I said earlier, will see the use if it remains on the pedalboard, as in sound, unfortunately I am as full of scratch "any tired, anything goes" hehehe!
Anyway, for now, I'm happy, and has seen the interest it must pay a tidy sum to get the owner of the pretty red box.
See the source
Did you find this review helpful?yesno
Cookies help us improve performance, enhance user experience and deliver our services. By using our services, you agree to our use of cookies. Find out more.