< All Articles
Agrandir
Add this product to
Novation Launchpad
1/ 623 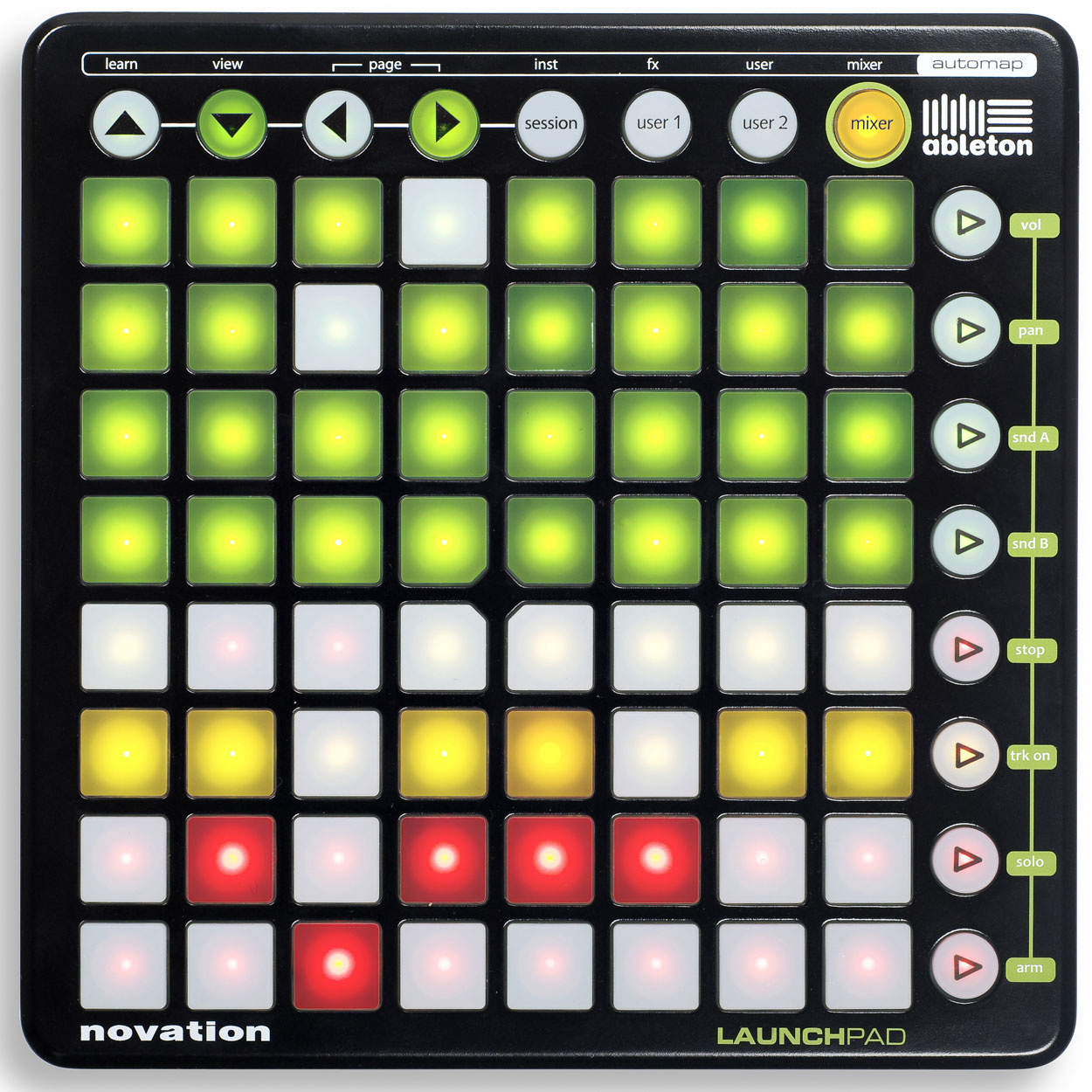 PAD Controller from Novation belonging to the Launchpad series

Novation surprised everyone by bringing out an Ableton Live dedicated control surface. Like Akai's APC? Not really, and obviously not at the same price.

Even though the Ableton Live revolution already goes back several years, it is noteworthy that dedicated control surfaces started to appear very late on. Except for Faderfox and Livid – which were the first to offer products conceived for Ableton’s baby – most manufacturers limited themselves to offering Live mappings for their generic controllers. The market started to get interesting for Abletoners when Akai launched its APC40. Following Akai steps, Novation introduced its own Live controller, but with a serious advantage: it’s sold for under $200 – half price of the APC40. So let’s take a look at what Novation has to offer for that price. 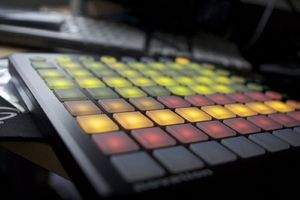 The Launchpad is basically an eight-by-eight pad matrix with 16 function buttons made out of the same smooth, translucent plastic as the pads. All buttons are backlit (green, amber or red, depending on the application – we’ll come back to this later). The device is a 6.45" long and 1.2" thick square. It weights about 1.5 lb. and is equipped with four large rubber feet to ensure it stays secure and perfectly stable on almost any surface, even when you hit the pads. There’s nothing to criticize the finishing quality about except for the pads’ hardness, but that ought to change with time. We appreciate its lightness and compact dimensions that allow you to take it with you in a backpack along with your notebook for mobile applications.

The device has only one USB connector. No MIDI in/out/thru, no sustain or expression pedal connector, only the bare minimum! But Novation points out that you can use several Launchpads at the same time using a standard USB hub. However, we received only one unit for the review so we couldn’t test this setup. We recommend you to use a USB hub with a power supply because the Launchpad is powered via the USB connector and it might be too much to ask from your computer to power several units at the same time, especially if it’s a notebook…

The device is, obviously, provided with a dedicated Live version (limited to eight scenes, though). Once you install Live and the drivers, you just have to declare the Launchpad as a control surface in Live and you’ll be ready to go. As a (funny) side note: the program installed the Novation Audio Control Panel on my computer, which is less than useless considering Launchpad is a MIDI-only control surface and I only got error messages when I tried to open it…

Among other regrettable details, I’ll mention the two-page Getting Started guide provided as “documentation” with the product. It’s true that the Launchpad is a masterpiece regarding intuitiveness but I still find it hard to believe that it takes only two pages to describe how it works… I bet Novation had to sacrifice such details in order to command such a low price. On the other hand, the manufacturer provides some nice video tutorials on its YouTube website which are clear enough to compensate for the lack of a serious user’s manual. 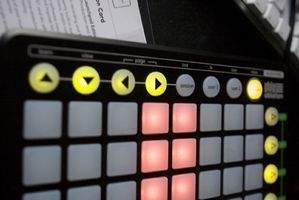 The Launchpad can both send (MIDI OUT) and receive (MIDI IN) information from Live, i.e. the changes you make in the software apply to the control surface, and it has four operating modes (Session, Mixer, User 1 & 2) you can access via four buttons in the bottom right corner of the device. In Session mode, each pad corresponds to a cell: when the pad is off, its respective cell is empty; when lit amber, the cell is loaded; when lit green, the cell is being played back; when lit red, the cell is recording. To start playing back a clip you simply have to press the corresponding pad. At the end of each row, eight round buttons allow you to trigger the different scenes (in Live, a scene is an audio or MIDI Clip line played simultaneously).

That way, each pad of the Launchpad represents an eight-by-eight matrix: when the 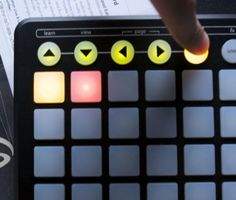 pad is lit amber the matrix is active, when lit green clips are being played back, and when lit red a clipless matrix is being played back. This very clever function allows you to manage up to 64 matrices with 64 cells each – which ought to be more than you need in most cases… However, it’s easy to get lost in the rows and I regret that the Automap inventor didn’t add eight small LED displays for each each row in order to show at least the track number or even the track name corresponding to each row. If Novation had added this function the Launchpad would obviously be at least one third more expensive so we won’t be too naggy about it.

Now, let’s switch to Mixer mode, which benefits from the silkscreens on the right side of the device. Each pad row has its own function. The bottom four rows allow you to arm the track, activate the solo and mute functions or stop each track. The top four rows are dedicated to FX sends, pan and volume. 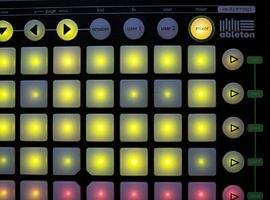 To reset the parameter to its default value you simply have to press the pad.

The round buttons on the right side allow you to edit the value of the parameters. For example, press Volume once if you want to control the volume of each track in 6dB steps. Press Pan to control the stereo panning (which ranges from 50 unities left to 50 unities right) in steps of 16 unities. 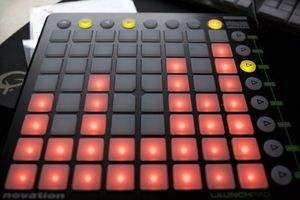 This is one of the main limitations of the Launchpad compared with the Akai APC: the “pad-only” concept doesn’t allow you to fine tune the parameter values or to edit them progressively. This shouldn’t be annoying in most cases unless your application requires precision. For example, due to the 6dB increment, it will be impossible to adjust volume envelopes manually like you would with a fader. 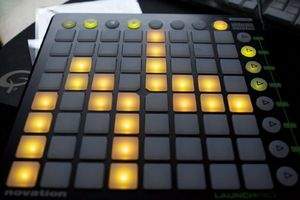 In fact, the Launchpad would be ideal with a second control surface like a small Nocturn or, even better, a Zero SL Mk II whose numerous controls, encoders and faders could complement the pads perfectly. You can always use it together with controllers of other manufacturers, like the Behringer BCR/BCF (which play in the same price range).

To access the User presets press User 1 or User 2. They are conceived for your own mappings, even though Novation provides them with mappings for the Drum Racks (User 1) and Max presets for Live (User 2). The Launchpad works like a classic controller for Drum Racks but the pads are not velocity (or aftertouch) sensitive. This won’t disturb electronic music fans, but you’ll feel quite limited if you try to program acoustic drum kits with the Launchpad…

Ableton’s excellent MIDI learn function works perfectly with Launchpad and you’ll be able to create your own mappings very fast by assigning a single pad to a boolean controller or a pad row to a continuous controller. To do that you just have to press the first and the last pad of a row or column while in MIDI learn mode, so that all pads in between cover the different values. Once again, the increments don’t allow you to control continuous values but it works fine and it’s very useful to control the cutoff frequency of a filter, for example.

Finally, the Launchpad can be used with any other MIDI application other than Live and it supports Novation’s Automap technology to make easy mappings of applications and plugins without MIDI learn function. It can be useful to control Guru, for example, or any other MPC-like software for that matter, even if the “pad-only” concept and the non-velocity-sensitive pads limit such applications… Always remember, the Launchpad was conceived for Live! If you are looking for a more universal control surface, you’d better choose another Novation controller or a competitor product.

The rugged, compact and light Launchpad will surely be a success among Ableton Live fans who can’t afford an Akai APC40. Novation clearly gave a lot of thought to its product, and even though some aspects could still be improved, it will definitely win you time and improve your ergonomics. As a result, you can rest assured that you’ll see it on lots of stages and in home studios, and certainly under more than a few Christmas trees…