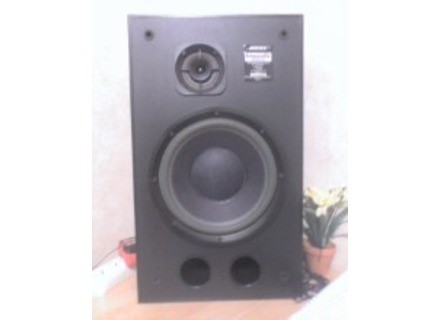 View other reviews for this product:
I just bought this pair of speakers through the classifieds after getting inspired (very) good reviews Audiofanzine I wanted to get myself my opinion, well, here it is done!
Without further delay in stride after purchase so I've plugged into my amp (vintage) Kenwood KA 5700 on which I already have two other Cabasse speakers Cutter (column).
As this amp to the possibility of powering two pairs of speakers, together or separately, it allowed me to get an idea of ​​the quality of Bose 4000XL comparing the Cabasse, simply by turning the knob "speakers" A or B!

So in terms of "yes, but" I would say they lack a bit of upper midrange, obviously Cabasse are rather very generous at this level (double woofer 17cm)
Regarding serious, they are indeed very active, no need to play on the knob "bass", it's useless! . When the treble frequency, there is nothing wrong, clear and not as loud on some speakers, they are present without exaggeration, but lack either, but mostly non-metallic, such as HP piezo absolutely horrible to listen to, unless you want to completely destroy the ears!
My opinion on the lack of upper midrange, I think, because these speakers are two voices, a boomer (25 cm diameter) and a tweeter, so devoid of HP medium, it is necessary that these two HP share the task of medium sounds, which is not necessarily obvious!, the woofer is very present and a large diameter, restores, understandably, low medium is evident, unlike cabasse to have a dual woofer 17 cm (as I mentioned above) and a very effective tweeter, and therefore more comfortable in the medium because of the low HP of smaller diameter ! although the lower recess is offset by the presence of a vent
There is no denying it, we clearly found in these speakers sound good old American Englishwomen or "vintage", round and warm sound that music lovers (like me lol!) Love so much!
To complete my opinion on the sound quality, and I still return to it, I think the addition of a medium HP (enclosure 3 votes) would have a perfect enclosure that would have nothing to envy the most brands, damage still!

I've never been pregnant before my other Cabasse and the famous Bose regarding the stereo, aside from doing "house" pregnant but my two Eltax library of my home theater with my two Boston "surround" and my "central" JM LAB, not to mention the bass subwoofer Jamo, so not easy to make comparisons, especially to compare home cinema and hi-fi!
Note that I mostly listen to the music of "80s", jazz, rock and roll and the general popular song, and that the speakers are not out in rather bad for these styles of music, although I Again, a little embarrassing when even some song sounds, I hear yet perfectly on Cabasse, but far behind the Bose damage lack of upper midrange, otherwise I would have given a rating of 5 stars earlier than 4!
So in terms of quality / price ratio of Bose, I would say it is correct, they do not fear mounted power, on the contrary, the sound is more "honest" when you push the volume and without noticeable distortion, at least in the ear;
To conclude, I'm (almost) fully satisfied with my purchase for € 80 I think I did a good deal, I recommend to fans of music 60s 70s 80s
Finally I use coupled with my Cabasse (speakers A + B), I think they complement each other perfectly well, so I will keep them!
See the source
Did you find this review helpful?yesno
Cookies help us improve performance, enhance user experience and deliver our services. By using our services, you agree to our use of cookies. Find out more.