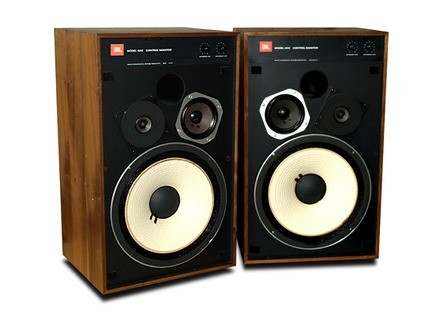 It's among the most respected/emblematic models of the brand and it is still in their catalog after 20 years. Hundreds of sound engineers have worked their masters using the 4312, the most famous album mixed with them is Michael Jackson's Thriller.

When it comes to sound reproduction, they are clear, clean, precise, with a very punchy and groovy low end, while the mids/highs lack, at the most, a bit of finesse compared to other speakers.

A very proper and transparent sound, you can hear a fly passing by several feet away...
Superb stereo image, airy and well-balanced.
Two controls to adjust the mids and highs to the acoustics of the room.
However, they lack some power to really move the 12" (white) woofer (ref 2213H), despite the 80W RMS, they need to be driven to the limits to sound best.
The mid driver is a 5-incher, model LE-5.

I've had them since 2005 after dreaming about them for 30 years, I then bought the 4312A version, with titanium tweeter (ref 052TI) and the white JBL logo on a black background.
I also bought 2 pairs of new woofers, as well as the tweeters, to have them as spare parts.
Because these speakers are pretty sought-after by people in the know and their price is only going up, besides them being not easy to find.
They are sold currently for about $1000/$1300, the first model.

I love their musicality and attack. The lows are very round and warm, the mids are well-proportioned and the highs have that chiseled touch that I love!
They are awesome for studio! And they are great as a HiFi system or for home cinema, too.
However, they are not the best to listen to classical music.
As for good amps to go with them, there are some Yamaha and Technics, but the best way to go is a tube MacIntosh! IT'S FOR THE JOY OF YOUR EARS AND YOUR WELL-BEING!!

I would love to get the recently launched 4312E, but the pair sells for about $3300.
Did you find this review helpful?yesno
Cookies help us improve performance, enhance user experience and deliver our services. By using our services, you agree to our use of cookies. Find out more.