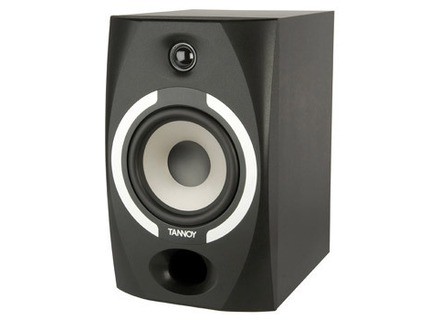 Reveal 601P, Passive Monitor from Tannoy in the Reveal series.

View other reviews for this product:
The Tannoy Reveal 601P's are a set of passive studio monitors. They are near field monitors and are pretty small. Of course since they are passive, they're going to require an external power amplifier to use with them, although I'm not sure if they recommend a specific type of them. I'm also not sure what power amp I have used with it, as the pair I've used is at a new studio that I just started up at. The monitors are best suited for monitoring during recording, and especially as a "B" set of monitors to contrast your mains. Still, you could use them as your mains in a smaller studio and mix on them if you get to know them well enough.

The sound of the Tannoy Reveal 601P's is quite good for such an inexpensive monitor. While I wouldn't recommend relying on them as your only monitors in a higher end studio setting, for home studio owners they are a great find. Even in a more professional studio, they can be great as a second set of monitors to compare with. They sound nice and clear but perhaps don't have as wide of a dynamic range as you'll hear in some larger sets of Tannoy monitors.

For the price, it's going to be hard to find a more professional set of monitors than the Tannoy Reveal 601P. These days there are tons of options when it comes to monitors, many of them quite cheap, but I didn't expect a set of monitors from Tannoy to be this inexpensive and I was surprised to see the price of them after I had used them. I was using them in a professional environment as well. Either way, they are a nice set of monitors in a smaller studio setting as they're definitely better than most of the options out there in this price range. Again, these aren't the best Tannoys, but just to have a name brand like that and have them be quality for this price is a great deal. Check them out if you want a very nice set of small monitors for your home studio on the cheap!
Did you find this review helpful?yesno