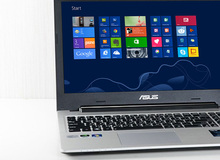 Finding the right laptop for music production can be rather troublesome. In this, the first of two articles, we're going to look at the reasons why laptops have problems and what can be done about it.

With a desktop computer you can select a few good components, screw the thing together, tweak Windows and you’re off making music. With a laptop there’s no real knowing what’s inside the box and you certainly couldn’t build one yourself. So, you have to make a choice, take a stab, and hope for the best.
http://www.pc-music.com/sites/default/files/a2_laptop_guitar.jpg
The thing is that it really should just work. You should be able to buy a laptop, plug in a compatible interface, install some software and make some music – why would that be difficult? In many cases it’s not and often people do exactly that, but sometimes you can run into trouble with audio dropouts, glitching, clicks and pops or simply a refusal to work.

Before we do, let’s get past the ubiquitous Apple MacBook Pro.

It’s everywhere, the glow of that white piece of fruit, throbbing annoyingly. Every electronic musician or DJ seems to have one. Every piece of marketing from a music manufacturer with a laptop product seems to feature one. It would be silly to do an article on audio laptops without mentioning it. The MacBook Pro is beautifully designed, elegant and ergonomic. The aluminium shell has a great quality to it, the backlit keyboard fantastic for live performance, it’s built with quality components and runs OSX which works wonderfully with Apple compatible products.

The biggest down side is the price. A 15” MacBook Pro starts at $1700, but that's only the beginning. The standard 5400rpm drive really needs to be upgraded to a 7200rpm one for audio work which adds a further $200. Standard tech support is only for 90 days unless you purchase the AppleCare Protection Plan for an additional $349, so without even thinking about it you’re over two grand and that’s for the entry level machine. Apple do somehow manage to generate a kind of mystical energy field around their products which makes them appear head and shoulders above anything else. In reality they are simply good quality laptops which share many of the same pros and cons of other good quality laptops. They have a tendency to run hot and the fans can be noisy; the battery life can be poor (although the latest generation are much improved, many Mac users complain of poor battery life after a years use so we don’t yet know how the new ones will pan out); they only have a couple of USB slots and with the standard version described above there’s no ExpressCard slot.

On the up side they do have powered firewire which is a fabulous thing that’s sorely missing on PC laptops. As with all Apple products you have the security of knowing that whatever works with it will work very well – however, that also means that your options are limited when compared to the PC. You can also run Windows on a MacBook Pro, but then it becomes a very very expensive PC as many of the advantages are to be found in the smooth flowing proprietary nature of OSX.

I don’t think you’d ever be disappointed with a MacBook Pro, and at that price you’d hope that you never would be. Are there alternatives? I believe so yes. I believe the laptop you get free when signing up to Tesco (popular supermarket chain in the UK) broadband is capable of making music, however, if you want to do things a bit more properly and can aim for a quality laptop then they can be completely capable of doing the job just as well.

http://www.pc-music.com/sites/default/files/dpc_spike.jpgThere are a number of complaints that can be angled at laptops when compared to making music on a desktop. They aren’t as fast, Windows can feel a bit sluggish, they can get very hot making the lap the last place you want to put it, and they can be noisy once the fans kick in. Also, as a supposedly mobile platform the battery life, when doing more than light surfing, is usually unexpectedly brief. These things aside you are getting a compact, portable recording system that’s a whole heap more convenient and adaptable than a desktop computer.

There is one real issue that seems to be the key to whether a particular laptop is going to be good or bad at handling audio and music production – DPC Latency. Deferred Procedure Call (DPC) Latency is when something interrupts the processor with a very important task and knocks everything else down to a lower priority – the latency factor is to do with how long that interruption lasts. Different parts of the system are doing this all the time but are so quick that the real-time running of the system is unaffected. However, badly written drivers allow the interruption to be held for too long which can cause other system components to be affected. The result in terms of music making can be a glitch, pop or drop out in audio playback. Bad DPC latency can render a powerful laptop useless for music production. There’s a wonderful tool that will analyse the latency in your system and display it on a real-time graph http://www.thesycon.de/deu/latency_check.shtml. If you get any spikes into the yellow or red then open up the Device Manager and disable devices until the spikes go away. Be careful not to disable something that your system needs to function, like the hard drives, but other devices are fair game.

I would disable things in this order:

What you're aiming for is a lovely green & flat readout on the latency checker for at least a few minutes. It can be a bit bumpy and still work well, it's only when it hits the red that there's a real problem.

http://www.pc-music.com/sites/default/files/fw_express_card.jpgThis is increasingly an area of concern. With most professional audio interfaces favouring the firewire connection then you need to have a good, working firewire connection on your laptop. But these things are never straightforward. It seems that not all firewire connections are the same. The specification appears to allow for enormous variation in the quality of the chipset and the drivers. In most cases, for most devices, such as cameras and external hard drives, then it all works fine.

For real-time, multichannel, high definition audio it can be a different story. It’s become accepted now that the Texas Instrument (TI) firewire chipset is the best choice for audio interfaces. Very few, if any, laptops come with a TI chipset firewire socket, the chipset is usually by another manufacturer and would appear as a generic “OHCI IEEE1394 Firewire port” in Windows. The only way around this is to get an ExpressCard firewire card (like this one from Startech) which fits into the side of the laptop (assuming it has a slot for it). Unfortunately our troubles are not quite over. The Firewire card connects to the system via the PCIe bus. The PCIe bus has a finite amount of resources and has to share them with other devices attached to the system. Modern laptops tend to pack in components so you get modems, Bluetooth, fingerprint security, the inbuilt firewire port and the graphics engine all vying for the same resources and the same bandwidth. Firewire is designed to negotiate for what it needs, however, multichannel audio needs more bandwidth than any other firewire device and it may be that there simply isn’t the room with all the other junk connected.

The best solution is, of course, to use a USB audio interface! There’s a sense of frustration in the industry with firewire at the moment. The amount of problems people have and the subsequent technical support load it causes for the manufacturers are having an impact. USB 3 has just arrived giving much greater bandwidth and speed than firewire and I imagine that it won’t be long before we see professional interfaces with USB3 sockets on them.

With all that in mind the chances are that your choice of laptop will work fine! DPC latency can usually be tackled by disabling stuff, and the firewire bandwidth problem is not that common. But they are both worth checking out as soon as you get your laptop so you can return it within the 7 day cooling off period.

In part 2 I’ll be looking at getting a laptop from Audio PC companies and also how Rain UK came up with their new Livebook.

← Previous article in this series:
How to Choose a Computer for Music Making (Part 2)