One of the most useful audio plug-in types in any computer-based studio toolbox is reverb. In this article, I’ll look at my five current “go-to” reverb plug-in choices. But first, a little background.

In music production, reverb is most often applied to a track or a mix to create a sense of space. You can also use it for effects that other audio processors would be hard-pressed to duplicate, making it an indispensible tool for sound design.

Unfortunately, the number crunching needed to digitally generate lifelike reverb is a reasonably heavy load for even the latest, fastest computers. That’s one reason you’ll usually want to insert a reverb plug-in on an aux bus that’s shared by numerous tracks, rather than inserting a separate plug-in on each track, which could overload your CPU if you add too many.

Whether software plug-ins or dedicated rackmount devices, digital reverbs come in two flavors: algorithmic and convolution. Algorithmic reverbs harness a computer’s digital signal-processing (DSP) capabilities to mathematically simulate the sound of rooms, halls, cathedrals and stadiums. A convolution reverb, on the other hand, begins with an impulse response (IR)—an audio sample of how an actual acoustic space responds to a fast-transient sound. Convolution processing analyzes a recorded signal, deletes the original impulse while retaining the environment’s response and then applies the response characteristics to other audio signals, allowing you to reproduce the sound of a room itself.

Although I use more reverbs than the ones listed here, these are five favorites of late. They all support most popular plug-in formats on both Mac and Windows, and all but one are algorithmic. Four of them run native, meaning they require no hardware other than your computer, and one requires a DSP host. 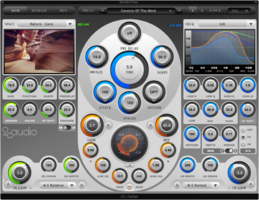 Introduced in 2009, Aether is a longtime favorite that focuses entirely on native, DSP-generated reverb. The first thing you’ll notice about its GUI is its size. Graphically, it’s almost certainly the biggest effects plug-in you’ve ever seen. With 40 parameter knobs, 30 buttons and switches, 6 pulldown menus, and 3 graphic displays, the Main page affords access to sections containing controls for early reflection, late reflection (usually called tail, with LFO modulation) and I/O parameters. Within those sections, you’ll find areas to alter space, time, frequency and mix, with a navigation bar up top. You can also make a few critical adjustments on the Browser page, which displays all presets and allows you to search them by keyword, and specify global parameters on the Info page.

Outstanding features include three bands of damping, a Shape parameter that adds complexity to the simulated environment and an fine collection of presets geared toward both emulating acoustic spaces and producing unusual sonic effects. 2CAudio also sells a preset expansion pack ($25) that I recommend highly. My only disappointment is that you can’t map the controls to external MIDI devices, though they will respond to host automation. Having so many user parameters makes Aether a tweaker’s delight. Overall, the sound is as rich, smooth and luxurious as any reverb I’ve heard, making it an ear-pleasing choice for a variety of applications.

Marimba – No FX: All the following examples begin with this dry recording. All the effected sounds are 100% wet, straight off the aux bus, so you can clearly distinguish the reverb’s character and quality.

Aether – Cauldron: Many of Aether’s presets are more about evoking an atmosphere than about simulating an environment.

Altiverb is the undisputed king of convolution reverbs and has played a role on thousands of popular, jazz and classical recordings. Introduced in 2001, it was the first convolution reverb running native on desktop computers. Version 7 for the Mac launched in late 2011, followed by a Windows version in 2014, and has been incrementally updated since then.

Using Altiverb on your tracks sounds as close as you can get to recording on location, because it captures the ambience of the many spaces and devices its IR collection supplies. Audio Ease’s ever-growing list of included and free downloadable IRs comprise spaces ranging from Frank Zappa’s home studio to the Great Pyramid of Egypt, as well as hardware devices like spring and plate reverbs of yesteryear. Granted, some of the environments aren’t terribly useful (a Boeing 747’s lavatory, for example), but the collection is certainly comprehensive.

Altiverb lets you view images of the sampled environment, view zoomable waveform and 3-dimensional waterfall displays, position your sound source in a virtual room, and modify details such as EQ, damping, pre-delay and so on. You can also create and import your own IRs via drag-and-crop. Compared with previous versions, Altiverb 7 is visually more streamlined, allowing you to select IRs from an image-based, searchable browser, and it allows you to switch presets using your host DAW’s automation. It also features a supplementary algorithmic reverb with a single control that adds high end.

Altiverb – 480 Guitar Hall: In addition to spaces, IRs can capture the sound of existing effects processors. This one is from a Lexicon 480L, introduced in 1986. 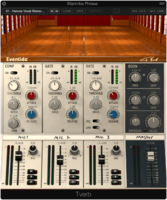 When I started writing this roundup, I’d planned to include Eventide’s Blackhole. It’s an amazing plug-in for sound design, but that’s not why most people use reverb. They use it to create and enhance the illusion of acoustic space, and for that, I’m more excited about Eventide’s new Tverb. Though I was skeptical when I read the initial press release about Tverb, I fell in love with it the moment I tried it.

Producer/engineer Tony Visconti is best known for his work with David Bowie. In 1977, while recording Bowie’s vocals for the song “Heroes” on the album of the same name, Visconti employed a technique that used three microphones spaced at increasing distances in a large, live hall in Berlin’s legendary Hansa Studios. The closest mic relied on a compressor to squeeze Bowie’s dynamic range, and a gate on each of the two more-distant mics opened as Bowie’s voice grew louder.

Developed by Eventide in collaboration with Visconti, Tverb reproduces his technique by supplying algorithms that realistically emulate the microphones, processors, and room he used in the original recording. You control the three stereo mics individually, with parameters for level, stereo balance, mute, solo, compression and gating. You get a graphical representation of a large room that lets you click and drag tiny mic stands to determine their placement. DAW automation even allows you to move them in real time while recording or mixing. The result is a stunningly realistic reverberation paired with a huge collection of presets designed for just about any situation.

Tverb – Orchestral Hall: One of my favorite reverb presets uses a setup quite similar to the one used on David Bowie’s vocal track for “Heroes.”

Tverb – Gated Echo: Tverb is capable of simulating all kinds of dynamic effects. 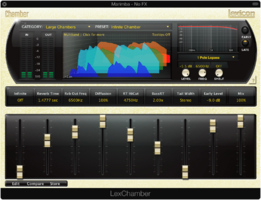 Lexicon’s digital rackmount reverbs have long been admired and desired for their lush sound and unique character. A few years ago, Lexicon managed to package that trademark sound in a collection of software plug-ins, with a $1,499 price that matched its stature in the recording industry. Since then, the cost has fallen to a fraction of that, and less comprehensive, more affordable editions—LPX Native Bundle ($200) and MPX Native ($100)—are now available.

PCM Native Reverb Plug-In Bundle (its full name) incorporates algorithms and presets from Lexicon’s versatile $3,000 rackmount PCM96. Because it’s a collection of seven diverse plug-ins with identical GUIs, PCM Native gives you tremendous flexibility. Each plug-in offers a different algorithm—Chamber, Concert Hall, Hall, Plate, Random Hall, Room and Vintage Plate—and supplies presets that are grouped by size or suggested application. Nonetheless, I’d rather Lexicon had bundled all the algorithms in a single plug-in, if only to simplify operation. Loading separate plug-ins repeatedly when you’re trying to find just the right effect can be inconvenient.

Parameters are identical in each plug-in, with nine onscreen sliders for pre-delay, reverb time, tail width, mix and so on, as well as knobs, buttons, a graphic display and a pulldown menu for six EQ types. Clicking on an Edit button lets you change the function of each slider, revealing a menu of 33 alternate parameters you can assign the slider to control. Once again, though, the plug-ins support DAW automation but not external MIDI control. No matter whether you choose a factory preset or design your own from scratch, PCM Bundle successfully captures the polished reverb sound that made Lexicon’s hardware so sought after.

Lexicon – Infinite LexChamber: All the classic sounds of Lexicon are just a click away.

Lexicon – Drum Room 2: Just because a preset is meant for drums doesn’t mean you have to use it that way.

In 1957, Berlin-based Elektro-Mess-Technik introduced the world’s first plate reverb, the EMT 140. The 140 weighed roughly 600 pounds and was a mainstay on records by The Beatles, Pink Floyd, Elvis Presley and many, many others. Although no company had ever designed and built a plate reverb before the 140, EMT got it right the first time. The 140’s sound is still very much in demand and an integral part of many recordings, but more often than not, that sound no longer comes from a large metal sheet suspended in a heavy wood-and-steel enclosure.

Universal Audio’s virtual EMT 140 requires a host device connected to your computer—either a UAD-2 DSP Accelerator or an Apollo audio interface. The plug-in lets you select from three distinct plates and specify parameters with much greater ease and precision than EMT’s original hardware. Its GUI combines the original plate amplifier’s controls, the remote damper controls and the plug-in’s DAW-only controls. The input filter emulates the original hardware with cut filters, as well as a later retrofit with fixed shelf EQs, and an LFO can subtly modulate reverb decay. With so many user parameters, the range of 60 included presets is surprisingly large for a plate reverb.

EMT 140 – Plant Plate A: Universal Audio’s plug-in captures the sound of a classic plate ‘verb better than any I know.

EMT 140 – Polished Plate: This plate is a bit brighter than the previous example.

A contributing editor to Electronic Musician, Geary Yelton has been writing for EM continually since 1985. He wrote the first book on producing music with the Mac and served as staff synthesist for three major Atlanta recording studios. Currently, he's a freelance writer and consultant for the Bob Moog Foundation and lives in Asheville, North Carolina.