These instruments and effects may not be well known, but they sure are powerful

Some people become addicted to plug-ins; others become connoisseurs. That is, they're borderline addicts but too refined to splurge on just anything. They need a certain something, which is what the following plug-ins — all available in AU/VST formats for Mac or Windows—have. These instruments and processors do things a little bit differently, and despite their awesome results, they're not yet household names in the music world. So you can proudly use them while looking down your nose at the uninformed. 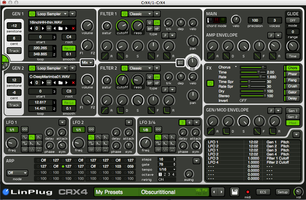 This extraordinarily versatile sampling synth is fully capable of emitting the full range of bass, lead, pad, drum, noise and effect sounds for electronic music, and it comes with 1,370 presets that prove as much.

However, inserting your own samples really sets CrX4 off. The one-window interface starts with four Generators, each of which can be an oscillator, wavetable, noise or a sampler. Your samples can pass through unscathed or be thoroughly morphed into something you'd never imagine. The Generators move through two multimode filters, six effect slots with 12 effect types, up to six envelopes and four LFOs. A modulation matrix helps with routing, and there's even a 32-step arpeggiator.

The audio example demonstrates a somewhat extreme case of sample transformation. It begins with the four quick-attack percussion samples that were loaded into CrX4's generators and then plays some of the final patch, which utilizes something of almost everything the plug-in offers. 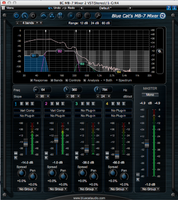 If you like to micro-manage your tracks when mixing, Blue Cat's MB-7 could be just the thing for you. Place the MB-7 on a DAW track, and the plug-in separates the incoming audio into as many as seven frequency multibands. Then it treats each band like it's own track on a mixing console, letting you boost, adjust or kill the band entirely; solo, mute or pan it; and you can even apply two AU/VST plug-ins on each frequency band.

If that weren't enough, the MB-7's color-coded frequency analyzer display provides great visual feedback when you're adjusting the frequency and slope of each band's EQ curve. MB-7 gives you a fast, easy and powerful way to make sure each track in your song stays inside the frequency range you want. Because it works with Pro Tools (AAX/RTAS), it can be a sneaky backdoor to let VSTs into Pro Tools sessions.

For this example, a dirty bass patch with plenty of high-end crackle runs for two measures before MB-7 kicks in and removes the high end. There are also two additional compressor plug-ins running inside of MB-7, one each for the two lowest bands. Automation is panning the bass within MB-7. 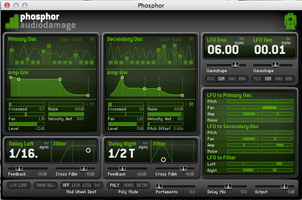 Phosphor models the primitive digital additive synthesizer alphaSyntauri from 1980 but updates it with modern features, including tempo-synced LFOs with modulation routing and delay units with filtering and cross-feedback. The oscillators use 16 faders to determine waveshape, and you can quickly draw them in or use a Randomize button. You can toggle between alias-free high-res audio and gritty 8-bit 80s-era quality.

Either way, Phosphor excels in chilly lead tones, pulsating pads and organs, and noisy SFX sounds that would work well in soundtracks and anytime you need some moody ambience.

This custom Phosphor patch exemplifies the plug-in's sound and shows how much motion and separation you can get out of a single preset. 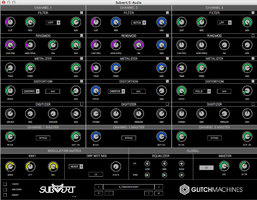 Subvert gives you so much more than just distortion, but without the additional cost. It splits the signal from your DAW into three channels that process in parallel. Each channel has five effects that process serially: multimode Filter, Ringmod, Metalizer delay, multimode Distortion and Digitizer.

If you don't like glitchy, dirty music, what Subvert does may seem like just noise, but it is a work of genius. Each effect in each channel can be bypassed or any of their parameters can be routed to a generous modulation matrix with four LFOs, two envelopes and other sources. Basically you get to explore a playground of cross-modulation possibilities, and Subvert feels as much like a creative instrument as any VSTi. The results you get from Subvert may be insane, but you'd be crazy not to try it.

In this example, a dry drum loop plays for two measures, and then Subvert kicks in with a new preset every two measures (a total of seven presets demonstrated). 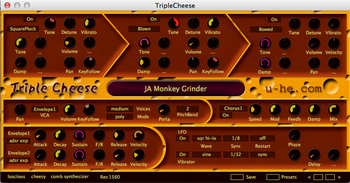 You probably know about U-he's monster synth plug-ins like Zebra, Bazille and the brand-new Hive. But this oddity from the company's entry in the 2006 KVR Developer Challenge, not only won them the prize, but it also proved to be one of the few unique synth plug-ins you can get for free.

Triple Cheese is called a comb synthesizer; it uses three stages of comb filter (or very short, tuned delays) to generate signals, rather than oscillators or samplers. It's not difficult to use if you understand basic synthesis. The generators have eight shapes each, the crucial Detune parameter, and even assignable knobs for getting creative with routing. There are also eight effects, two envelopes and an LFO.

But most importantly, Triple Cheese has character. While other free synths often just give you the basics, Triple Cheese sounds airy and otherworldly. It transitions well from glassy staccato sounds to harsh, thick textures. Yes, some of it's cheesy too, but it's the kind of cheesy you'd find in a nightmare about circus clowns, so I'll take it.

Triple Cheese is great at adding an odd twist to fairly standard sounds, like this organ preset "Monkey Grinder."

Log in
Become a member
Viewers of this article also read...
learning In tandem with Advance series controllers, VIP lets you access all your VST instruments in a single interface
learning Multiply your creative processing with these multi-effects plug-ins
learning Modulation Effects - The Chorus Effect
learning Add space to your recordings with these free reverb plug-ins
learning Applications of Physical Modeling Synthesis
learning When you want to get creative with an audio processor, nothing beats a delay
learning Getting to know your mixing tools
learning The Andrew Scheps Interview
learning Andrew Scheps talks compression, plug-ins, panning, EQ and more
Voir tous les dossiers