Add space to your recordings with these free reverb plug-ins

We all know that reverb is one of the staple effects in a mixer's toolkit. In fact, you'd be hard pressed to find a recording or live mix without at least some reverb in it. But does getting a good reverb sound require that you spend hunks of money on high-end plug-ins or hardware? Not necessarily. You can actually enjoy a variety of reverb sounds and types, design your own reverb settings or just learn about the nuances of reverb, without ever reaching for your wallet. To that end, here are five cool freeware reverb plug-ins. 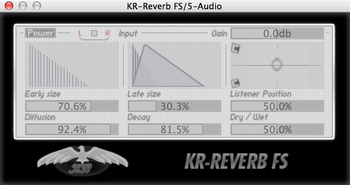 The small shop KResearch makes a commercial modular reverb/echo multi-effect plug-in called KR-Space, and this easy-to-use freebie, KR-Reverb FS 1.5, is derived from the reverb module of that larger product. KR-Reverb FS internally adjusts the EQ and damping controls to produce a warm, general-use reverb, so this can be considered a beginner-friendly plug-in. That said, you still have plenty of opportunity to adjust the sound by the size of the early and late reflections, the diffusion, decay and listener position.

A couple of displaysin the GUI show the relationship between early reflection size/diffusion and late reflection size/decay in a visually intuitive and helpful way. This plug-in works well for either quick-and-easy coloration or trippy, non-tempo-synched effects that you may hear in dub music.

This audio example runs through a drum loop that's dry at first and then starts out at KR-Reverb FS's default, "neutral" position, before manually exploring some of its more extreme possibilities. We love when a plug-in takes a slightly different approach to a traditional effect, and PSP PianoVerb fits that bill because it approximates the natural reverberation created by piano strings. It has 12 string operators tuned to low-register A through G#. You can transpose those tunings ±24 semitones and then fine-tune them by cents and detune them, as well. The "string" controls include Damping and Decay Time, and the plug-in has an internal system for saving presets, as well as a few factory presets.

As you may guess, PianoVerb sounds particularly metallic, and on certain audio sources at extreme settings, it can even create a subtle but stinging distortion. Because of its unusual nature, PianoVerb doesn't really sound "good" or "bad" on particular sounds. It's just fun to experiment with it to see what you'll get.

In the following example, a 16-bar loop runs through a dry drum track for two bars, then cycles through PianoVerb's six presets for two bars each and ends with the dry drums again. Particularly on some of the presets, it really does sound like you played the recording closely up against some piano strings. 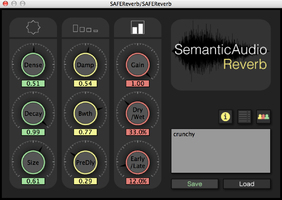 The SAFE Project comprises a suite of four free plug-ins, including an overdrive, a compressor, a parametric EQ and a reverb. The cool, semantic twist comes from each plug's descriptor box, where you can either save or load settings attached to a descriptive term, such as "warm," "punchy," "aggressive," "scary," and so on. If you dial in your own sound with the plug-in's controls, you're encouraged to describe it and then upload your settings and description to a server so they can be added to the data pool. Likewise, you can simply type in a term and see what you get.

Aside from just being an interesting project, the SAFE Reverb sounds very good for general-purpose reverb, and it’s easy to create your own settings on its intuitive 9-control interface.

In this audio example a dry synth loop is followed by four different descriptor settings from the Semantic Audio database: "beautiful," "symphonic," "warm" and "crunchy." 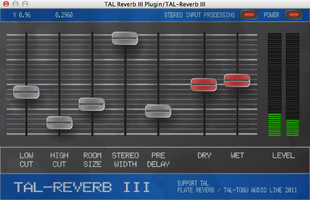 From one of the great freeware creators, TAL-Reverb III is a simple stereo plate reverb, which is a type of synthetic reverb captured from vibrating steel plates under tension. Its simple but effective interface harkens back to early digital reverbs, with just seven sliders to operate: Low Cut, High Cut, Room Size, Stereo Width, Pre Delay, Dry and Wet. With no preset sounds, this a good module to get comfortable with creating your own reverb settings.

TAL-Reverb III's synthetic plate sound can work well on just about anything where you want to add a somewhat ghostly or ethereal quality. It's not really the classic reverb sound, and that's a good thing. You need some variety in your reverb toolkit.

In the example, we apply two slightly varied TAL-Reverb III settings: first, a large room size to a Rhodes piano, and then a small room size to a trumpet.

Another go-to developer for freeware plug-ins, Voxengo rocks the vintage, 1U rack space vibe with its OldSkoolVerb. By no means is it difficult to use, but it does have the most complex interface of the five reverbs here. It includes six reverb modes, including Deep, Reverse and Slapback, each with its own savable settings. If you're just starting out, you could learn on some of these other units and then step up to OldSkoolVerb. On the other hand, you could just keep it in Default mode and/or dial in one of its 18 useful presets.

OldSkoolVerb has diverse potential sounds, including plate reverb, room sounds and hall sounds. Voxengo recommends it for non-percussive, slow-attack sounds like piano and vocals—we love the Slapback particularly on vocals—but we say, go ahead and try it on everything.

In this example, a Hammond organ and a bass guitar go through two of OldSkoolVerb's presets: first Big Reflective Room and then Grand Hall.

Log in
Become a member
Viewers of this article also read...
learning The Top Convolution Reverbs
learning Choosing your working tools
learning These instruments and effects may not be well known, but they sure are powerful
learning Getting to know your mixing tools
learning Space Invaders - The Whys of Using Reverb
learning Modulation Effects - The Chorus Effect
learning Andrew Scheps talks compression, plug-ins, panning, EQ and more
learning Essential tools for your mix
learning A/B Your Plug-Ins
Voir tous les dossiers