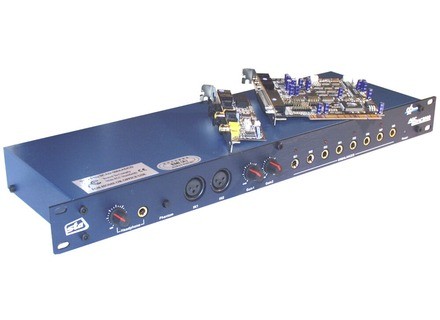 View other reviews for this product:
Former owner of a gadget labs wave24, j'espre Hoontech that will not follow her in limbo ... prdcesseur brief

The price is attractive for such a configuration and the manufacturing care of (a is not cardboard). But hey, that is a rack with analog connections. 8 in + 8 out, I / O optical and SPDIF, plutt nice for 570E (June 2001 prices)

The manual is a bit messy, we do not know whether to install the ASIO driver in addition to the card, ... It takes a little searching and go on the forums. a does not own.

installation on Windows 2000 went very well, but also in XP Reason does not work with a single pair of outputs (bug Reason, apparently fixed in 2.0)

The drivers have been t days in August 2001!! Since then, the poor and modrateurs dvous tech forum spend their time wiping the critics on this point. In addition, lots of people seem to have problem of implementation.

In Acid 3, DSIR behavior leaves the cursor as often lag behind the sound,
and dcalages frquent lead to often stop / start to reset. Changes in the bus for a while playing causes crash irrmediablement
The 8 outputs mono work well and no problem of blowing by them

For cons, the output 'sound blaster like' Windows uses the breath out of a rare effect. I can not use it, so I write everything on my first pair out of the rack.

- Use for a little over a year, using episode, no time!
- Referral interface output is practical, and also 8 outputs
- I have a gadget labs before, I would have had they not guard col. Converters came out better sound qualitbr /> - the ratio q / p is widely COMPTITE for the quality of services rendered by priph.
- I well liked that Glab does not run, the drivers came out more often.
See the source
Did you find this review helpful?yesno
Cookies help us improve performance, enhance user experience and deliver our services. By using our services, you agree to our use of cookies. Find out more.