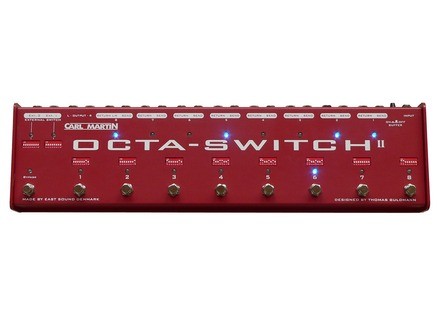 Value For Money : Correct Audience: Anyone
So I finally got it!

Problems:
1/ every live performance soon turns into a musical tap dance contest. OK, the audience gets twice in its money's worth - sound and visual performances.
2/ things can be messy (g'dam loose switch on the Holy Grail Plus, and so on)
3/ if you're like me the singer-guitarist in your band, you tend to negate the stereotype claiming men can't do two things at once - let alone 3 or 12.

So, Carl Martin (and other -too rare- brands) came up with that concept of control switches.

Up to 8 pedals can be plugged into it, plus the amp's channels (or two different amps if you like), you tweak the small switches that correspond to such or such pedal/channel and you can parameter up to 8 sounds of your own. There's an included buffer - OK it can then lack mids but a graphical EQ at the end of your chain and there you go, or even simpler you turn the buffer off.
Works on 9V AC.

It really makes life easier in rehearsal, studio and more than all un live!

The metal-made pedal seems reliable, only the pedal selection switches are made of plastic.

It still has a few cons: first it's BIG and takes a lot of space in an already crowded pedalboard! So now I need a new pedalboard.
It makes a lot of (preferably high-quality) jack cables necessary - 2 per pedal, send and return.
Oh, and by the way, you can almost forget about stereo.

Overall, it's very useful, couls be a little cheaper and has complete features.

In case it would fail me someday, I'd immediately replace it with the same.
Did you find this review helpful?yesno
Cookies help us improve performance, enhance user experience and deliver our services. By using our services, you agree to our use of cookies. Find out more.