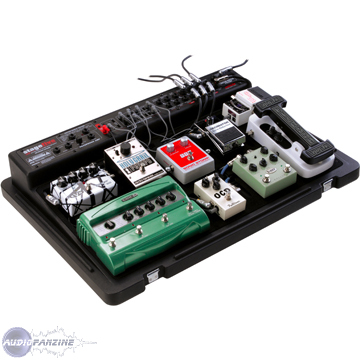 It’s no secret that many guitarists like effects and that some are even addicted to their pedals. But of course there comes a time when it becomes necessary to make all these small boxes easier to transport and connect. That is partly why pedalboards were invented and marketed by brands such as SKB with their Stagefive, which we’ll be taking a closer look at ...

It’s no secret that many guitarists like effects and that some are even addicted to their pedals. But of course there comes a time when it becomes necessary to make all these small boxes easier to transport and connect. That is partly why pedalboards were invented and marketed by brands such as SKB with their Stagefive, which we’ll be taking a closer look at ...

In Audiofanzine’s forums or elsewhere it’s clear that when it comes to guitar effects, 2 schools of thought battle it out on this almost philosophical question. If you don’t count the "direct into the guitar amp" believers (poor guys), there’s on one side the multi-effect enthusiasts with it’s cumbersome digital programming and sub-sub-sub menus. And on the other, the stompbox fans (2-knobs and let’s play).

So you ask, how has the ultra-archaic effects pedal resisted the digital invader? There are objective reasons on the one hand: ease of use due to there being only a few knobs, the "one pedal, one effect" concept , the case where guitarists only need one or two effects (yes they exist!), and their robustness compared to the average multi effect. On the other hand, we find more subjective reasons: people talk about the warmth of analog compared to digital, not to mention trying to get the exact effects used by many of our idols, who recorded legendary music way before the advent of digital technology. What would "Voodoo Chile" be without a Wha Wha? "Message in a bottle" without a Boss Chorus, or any U2 song without 2 truck loads of all kinds of pedals?

For pedal lovers, however, several problems can arise, especially if, like me, you want to have several effects of different brands available at your feet. Indeed, the chaining of different pedals, and their adapters, if you want to go without batteries, can cause a lot of issues: electric buzz, cables everywhere looking like spaghetti, and especially transporting headaches! Nothing’s more complicated than gigging with a set-up of 7 or 8 pedals with adapters. This often necessitates a disassembly/reassembly process that is not only time consuming but that can also at times cause errors or malfunctions.

Several solutions exist. Pedal addicts are often forced to go the « Do It Yourself » route and build their own pedal board. A rewarding task in itself, but time consuming and requiring a minimum of know-how. The alternative remains the Custom Shop, but not everyone has the means of a David Gilmour and can afford a Custom pedal board by Pete Cornish.

An intermediate solution has been conceived by SKB with their stagefive, a pedal board designed to facilitate the life of a pedal lover who’s neither very rich nor a handyman.


Let it be said right away, the stagefive is imposing. It is designed to hold and protect about 8 pedals, depending on the pedals used. It may be made of relatively light plastic, but it’s resistant (when the lid is closed, you can stand on it without any risk of damaging the pedals - yes I tried!), and it’s weighty even when empty.

Nothing comes from nothing. The pedal enthusiast must accept the chronic back pains caused by his passion, or switch to digital multi-effects!

The stagefive’s weight can also be explained by it’s numerous features which are designed to make the pedal aficionado’s life easier, judge for yourself:

In a nutshell, all the things that let you get the most out of our pedals...


First of all, don’t count on the manual to help you with the specific configuration of your pedal board. It contains only a few examples of fairly basic setups, with 1 or 2 amps, and above all only shows audio routing, especially when the addition of some electrical setups would have been welcome.

In fact, it’s the most important point of any pedal system. Manufacturers have adopted several power formats, and in particular power polarities. Depending on the case, for DC powered pedals, the + or - may be at the center of the connector or not. Any error can cause damage to the pedals. And even if the user manual warns you about this, a guitarist might wonder what the little "+" switch next to each adapter means. In this case, it’s the positive polarity indicator at the center. In any case, you should check the specs of each pedal to verify voltage and polarity

Installing the pedals themselves is no problem. Adhesive straps are provided to attach the pedal to the base, but you should remove rubber pads that are too big from your pedals. A typical example being the Cry Baby-type Wah Wahs, which adhere to the velcro much better without their pads. It’s a small operation that almost any non-handyman should be able to achieve without any accidents! Regularly spaced slots provide passages for audio cables and adapters. However, pay attention to the size of your jacks. Mine being rather thick, I sometimes had trouble getting them into the slots, in particular those at the bottom of the pedal board, which are less deep than the others. The end result is less esthetic than a homemade pedal board with wiring passing under the support board, but it has the advantage of allowing easy setup changes. Loop routing is quite easy and intuitive, the signal path is well represented on the Pedal Board itself if not well explained in the manual.

My only regret is that it lacks a switch that would route the signal to either one of the loops. A simple A/B box does the trick, but that’s one less place in the Pedal Board. It’s a shame they didn’t think it through!


As for sound quality, there’s nothing to complain about, on the contrary! The preamp/buffer is very discreet and does not noticeably color the sound. For purists, it is bypassable via a dedicated input.

Similarly, the electric power is impeccable. In my apartment where the ground leaves something to be desired, I have often had to deal with an annoying hum. Not to mention concert scenarios or even in some cases, the stage power being shared with the fridge and/or neon lights... Here, we definitely see the interest of such a dedicated system.

Of course, depending on your pedal setup, you may lack one or two power connectors, but the stagefive is consistent, featuring the majority of 9-volt outputs, which remains the most widely used format. Of course I wasn’t able to power my 18 volt AC Vibe Unit but here we are getting into more esoteric territory!

Indeed, a nice option is featured: the ability to vary voltage from 4 to 12 volts DC on 2 outputs, allowing you to either electrically boost some pedals (careful, all pedals don’t support this) or on the contrary to simulate an almost dead battery. Try it on your fuzz or overdrive pedals, and you’ll get some different sounds out of them!

I didn’t really seen any interest in the headphone output, except to connect a Pod or Sansamp output before the entrance to the headphone amplifier, in order to get an amp and speaker simulation.

As for the cable tester, it is essential and comforting to use, especially when touring with your pedal board and you don‘t want to have to lug around a tester. All in one, and convenient!


After several weeks of use, Stagefive has proven to be a well thought out guitar pedal tool. The possibilities for routing and electrical power, plus the extra cable tester meets 90% of the needs of digital-phobic effect lovers.. If its weight and dimensions are somewhat imposing (start weightlifting immediately), it is unfortunately the price to pay for a single, comprehensive, and safe solution! And still it’s nothing compared to the weight of some custom wooden pedal boards. Among its slight shortcomings are the too concise manual, and the lack of a switch button between the 2 effects loops. At about 400 €, it’s not for everybody, but its strength and quality, in my view, make it worth the price.

[-] Manual too light
[-] Doesn’t handle some less common adapters - check before!
[-] Lacks an A/B switch to go from one effects loop to the other