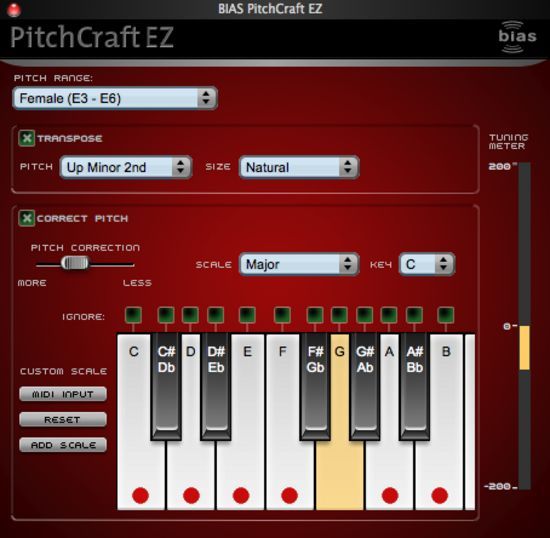 Using algorithms from PitchCraft, PitchCraft EZ offers many core features while focusing on ease of use and quick, pro-quality results, according to the company. The pitch, transposition, and formant preservation DSP algorithms employed ensure natural sounding pitch correction and transposition, while offering additional options not found in other low priced solutions, BIAS promises.

BIAS says that PitchCraft EZ "minimizes the learning curve typically associated with advanced solutions at higher price points." Rather than dominating the user interface with analysis graphs and a plethora of parameters, PitchCraft EZ is designed to "maximize accessibility with a streamlined "sports car red" interface". BIAS says it chose carefully to include important features normally reserved for solutions priced several times higher.

In addition to pitch correction and scale conformation, PitchCraft EZ is said to offer a variety of scale types with customization (via mouse or MIDI keyboard input), as well as independent formant and transposition control (offering control over the "cavity size" as well as pitch shifting intervals). The addition of independent transposition and formant control is designed to offer the ability to create both natural and "super-natural" effects such as "gender-changing" (transforming a male voice to female or vice versa) as well as "aging" (transforming an adult voice to a child or vice versa), and "resizing" (making a smaller person's voice sound bigger or vice versa), according to the company.

PitchCraft EZ is now available through the worldwide network of authorized BIAS resellers and distributors as well as directly from BIAS at an introductory suggested retail price of $99. The standard edition of PitchCraft is currently available for $149 and is also included with the Master Perfection Suite ($599).
Be the first to post a comment about this news item