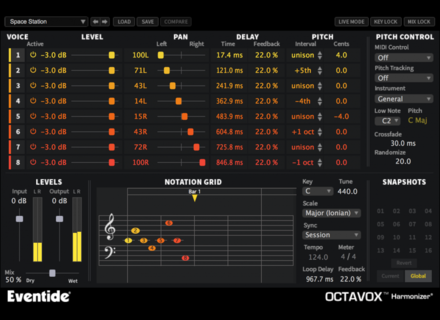 Value For Money : Correct Audience: Advanced Users
Buy this productView price information >
A massive diatonic harmonizer, you can output up to eight voices based on a chosen key and timing interval (I also demo the Quadravox later in the demo, which offers similar presets, but with four voices). This plug-in is based on the Eventide H8000 hardware effects processor, allowing you to stack harmonies, make instruments sound thicker and more massive and, of course, create rhythmic sequences. With 70+ presets you can tweak to your heart’s content and develop unique layering by manipulating each voice independently with different panning, delay times, feedbacks, pitch, etc. For the musically minded (those into theory and who read music), each preset includes a Notation Grid that shows the pitches on a music staff and with a quantized grid for placing notes over time (color and brightness indicate pan and level for each voice); this allows for a more musical programming experience.

And if you’re into MIDI, each voice can be set to a MIDI note, including voice shift amount (pitch bend) and randomization (modulation wheel). For example, this allows you to change voice key/scale intervals on the fly as you perform or record voice. Some other useful features include the MixLock (which keeps the wet/dry of the effect static as you scroll through presets or user-defined snapshots) and the Key Lock (which locks the key and scale). And since each preset can have nine Snap Shots, you can create variations on a theme and select them at a click of a mouse.
The demo accompanying this overview uses nothing but guitar, but it doesn’t take much imagination to think how this plug-in can work with drums, synth and voice.