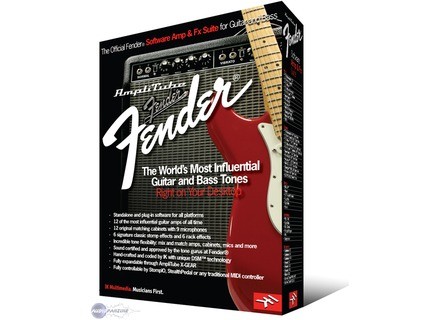 Buy this productView price information >
View other reviews for this product:
Installation without any difficulty. The difficulty (relative) is at the level of authorization, which must be done online and I process this kind of stuff myself ...
The configuration, however, is rather easy. You just do not forget to go to the prefs to indicate the sound card used. Otherwise, serious fastoche!
I have not had to deplore incompatibility. When the manual, it honestly feels no real need since we are on familiar ground. The settings are those found on an amp, or effects, whether racks or pedals.

I have a large configuration (Intel Xeon Quad Core 2.8 Ghz x 2) is no particular problem. But I think Amplitube Fender is not too resource hungry. I never had to mourn crash in Stand Alone and integration into the DAW (Cubase, Reaper, Logic) is no problem.

I use this app for at least three years. I must say that I'm almost the whole series of Amplitube (3 Amplitube, Ampeg 2, ExGear). I tried almost everything that is done in this area. I also tried just about all emulations that exist in sequencers (Cubase, Logic, Digital Performer) and I must say that Amplitube series is by far the most convincing and effective.
For the record, Fender has been involved in the emulation of Fender amps. I must say that the result is quite impressive. You plug the guitar, you set a Bassman, a Twin Reverb or Deluxe, and the feeling is strong. The sound is powerful, the feeling of being responsive to one of these gems Fender is there.
Amplitube Fender is particularly effective insert guitar track in a mix and brings a special dimension to the guitar. The effect is stunning. iKmultimédia also consider including a gaggle of effects pedals and racks, but came to produce all kinds of effects.
Online, a participative page offers a multitude of settings and each brings his stone to the building. iKMultimédia also just added a bundle CustomShop free to acquire additional amps and effects, with some parts of course ...
I do it again this choice without hesitation. Amplitube Fender (and Amplitube 3) is a soft essential to any guitarist who is working on DAW and seeks alternatives to taking out his studio and concert.
See the source
Did you find this review helpful?yesno
Cookies help us improve performance, enhance user experience and deliver our services. By using our services, you agree to our use of cookies. Find out more.