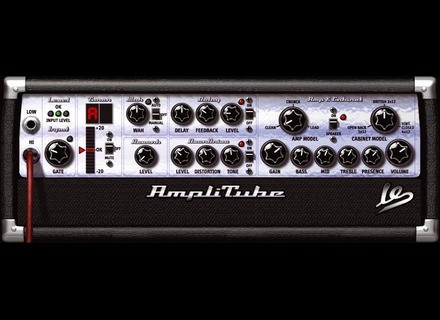 View other reviews for this product:
- Installation is a pain. Since it is a soft bundle in lots of entries and to return codes to activate the final. I know it's against copying but it is heavy. Bad point for that.
- No incompatibilities noroire noticed.
- The general configuration is fairly intuitive as it is a plugin ...
- Manuel?

- I use it on an A64 3000 + 1GB RAM E-MU0404
- It turns out very well and sounds, but also less clearly typed, its big brother the Amplitube. It is through simulations against HP that fish ... too empty, not enough fishing. But overall good with my EMU0404 (2ms latency ASIO AAAHHHH) 1000X ^ I sound more pleasant than my ZOOM2000.
- In performance, he seems less demanding standard than Amplitube. But it was quantified.

- I use it for two months
- What I like most is the simple and robust interface that looks like a guitar amp. Quite convenient. The sound is of good quality especially for distortions aims trash: they are very rich. Little bonus for the tuner. More vintage sounds are much less convincing. The presets are fairly well provided (for an LE version)
- The echo effect is not essential because the reverb is good. We would have preferred a small modulation chorus / flanger instead. But ...
See the source
Did you find this review helpful?yesno