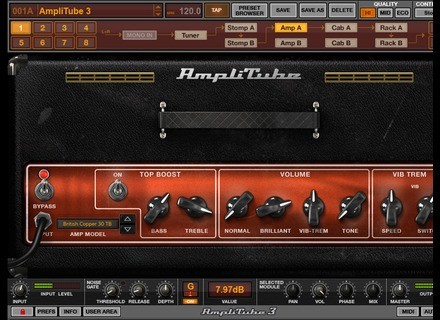 IK Multimedia has announced that AmpliTube version 3.7.1 is now available as a free download/update.

This update is in response to players who wanted better allocation of CPU Power and RAM usage. Now, AmpliTube version 3.7.1 uses 30% less CPU power and 35% less RAM, allowing you to use more instances of AmpliTube on individual channel strips in your favorite DAW, the company promises. According to IK Multimedia, the 30% reduction of CPU usage also means that players who use AmpliTube in standalone mode can run AmpliTube more efficiently on older, less powerful machines.

Other changes to AmpliTube include the addition of the Preset Up and Preset Down menu items in the StealthPedal controller dialogue menu, and overall stability enhancements. A new preset "transition" feature also allows users to select the type of transition when switching from varied presets.

Existing users can download the AmpliTube 3.7.1 update from the "Downloads" section by logging into their User Area.

New users can check out AmpliTube 3 Custom Shop: AmpliTube 3 FREE is a basic version of AmpliTube, with 24 gear models included. Plus, the included Custom Shop allows you to try and buy over 200 new gear models available as à la carte purchases.