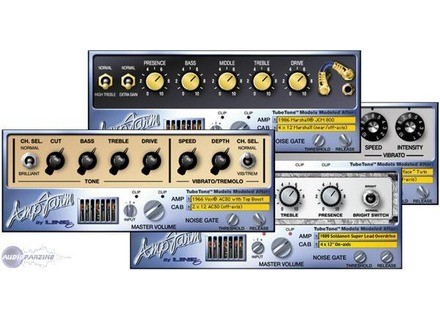 Amp Farm, Software Amp Simulator from Line 6 in the Plug in series.

View other reviews for this product:
Amp Farm is a pretty good amp simulator from Line 6, who have a great handling on all things digital. There weren't any compatibility issues with my ProTools setup. The manual explains everything pretty well, and makes setting it up very easy. The general functions of Amp Farm are easy to use and the functions are accessible. The interface is set up like an amp head, which makes it easy to control.

The software works fine for me, and the gear/software configuration has yet to give me any real problems. The amp modeling performs better than most that I've seen, and this is coming from a guy who tends to avoid digital amp modeling like the plague. I've had this for about 2 years and I've slowly but surely found more and more uses for it. I would say that I prefer it to the other amp modeling programs we have at the studio I work at. Most professionals would agree, though they would almost always unanimously agree that it is no substitute for an amp.

I like the variety of tones and the different kinds of amp sounds that you can get. Some of them are weak, as is typical with most amp modeling programs, but the ones that are good are really worth using. I tend to use them more to color the sound than define it; I'll use it on a direct signal and mix that with an mic'd amplifier. I think that this combination tends to work well, especially when you find that the guitar sound you are using is good but needs a little bit more texture to round it out the way you want it. The sound is really clear and razor sharp. It simulates tube amps better than any plug-in I've seen. I would say that for the price, it's the best plug-in you can get. It's also possibly the only one you need. However, I'll say it again, don't accept it as a substitute for a real amp! It's not enough on its own. I would recommend it as a coloring tool, and that's it!
Did you find this review helpful?yesno
Cookies help us improve performance, enhance user experience and deliver our services. By using our services, you agree to our use of cookies. Find out more.