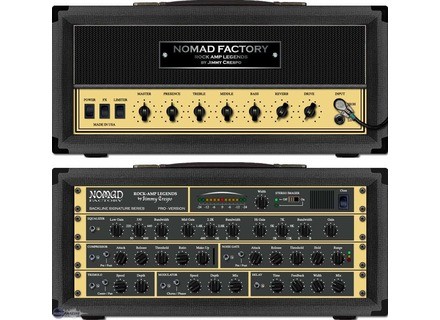 View other reviews for this product:
The Nomad Factory Rock Amp Legends is compatible with Mac and PC machines. But the specs are very important with this plug in because if your computer cannot handle it, it will not run smoothly. On my Macbook I had to be running Mac OSX 10.6 or higher (snow leopard). On my Windows machine Vista worked fine and so will Windows 7 both 32 and 64 bit but you will need to have at least a machine running 2GHZ and preferably 2 GB of RAM if you want it to run at its best. It will work as a VST, or RTAS for Pro Tools users.

As long as all of the specs are good to go you will have no issues getting this plug in up and running. It did take some time on both of my machines because it is a rather large install. But once it is installed you can go right in your DAW and start working with it. I would not want to run a lot of instances of it simultaneously because it may slow down your session depending on your CPU.

The interface of this VST is very easy to understand there are just a lot of options/knobs to work with. This amp simulator simulates the American Rock amp models and a few British Rock Amp Models. All of the amps sound great and when they gave me so many options to work with. There is 3 band Parametric EQ's, Reverb and noise gates (attack, threshold, pre/post).

This plug in is very good for the price, but it is suppose to not use much CPU; on my system it uses more CPU than I expected it to use so I am not able to run it a bunch of times unless I track out the audio and bring it back in as a .wav file. No matter what your playing style is, there is an amp for you in this plug in.