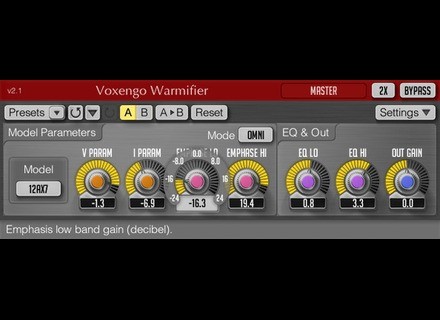 It is available in AudioUnit and VST plug-in formats (including native 64-bit support), for Mac OS X (v10.5 and later), and Windows computers.

Warmifier is a special plug-in which processes audio signal in a way similar to analog valve equipment. By using Warmifier you can achieve valve warming and “console” coloration effects, the company says.

Warmifier is applicable both to the complete mixes and to the individual instrument tracks. You have several parameters at your disposal that allow you to control the strength and the color of the effect. Also, you have several valve types to choose from. Each valve type offers a different overall coloration.

While the effect of this plug-in is subtle, the difference it makes is similar to the difference in sound between different analog mixing consoles. In most cases it boils down to adding a subtle “sparkle”, “presence”, “warming” or “solidifying”
effect to a sound track it was applied to.

Warmifier 2.0 added the following features since version 1 (version 2 can be used in projects alongside version 1):

Demo version of Warmifier can be downloaded freely at the Voxengo website: www.voxengo.com/product/warmifier