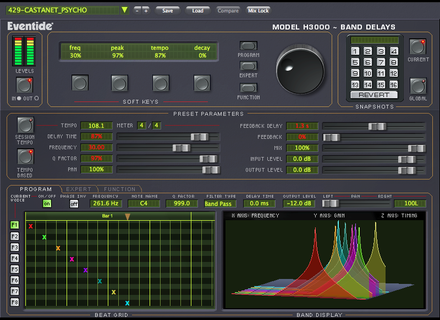 Eventide now offers its H3000 Band Delay multi-effect plugin in AAX, VST and AU formats with no need to purchase a whole bundle.

Sometimes considered one of the major assets of Eventide's renowned H3000 Ultra-Harmonizer, the band delay feature had already been turned in the past as a TDM plugin. It was then released as a native plugin but only available as part of Eventide's Anthology X Bundle: it can now finally be bought on its own.

The concept behind it is to take any instrument or vocal and dice & slice it in both time and frequency so as to create up to 8 distinct voices, each of them with its own unique frequency, reconance, filter type, delay time, volume and panning. The effect can also be automated and manipulated in real-time through MIDI, enhancing the creative possibilities of this effect and making it potentially an instrument on its own. 80 presets are included.