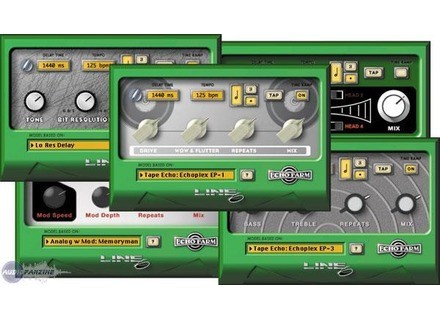 Echo Farm, Software Delay/Echo from Line 6 in the Plug in series.

The Line 6 Echo Farm was easy to install and I have never had any problems with installation or compatibility. It is easy to follow and the interface of the plug-in is laid out smart and easy. I've never had access to a manual for this plug-in.

I run the Line 6 Echo Farm on a Mac Book Pro with a 2.2 GHz Intel Core 2 Duo processor and 4 GB of RAM. I use it in Pro Tools LE 7.4 that runs with a Digi 002 rack version as an audio interface. I have also used it with a Pro Tools HD system and have never had a problem running it on either system. I've only used one or two of these at a time as I usually put delay on a stereo aux track and send buses to it. This saves computer performance and it will run better if you don't have a bunch of these up at once.

I've been using Echo Farm for a little over a year. The sound quality of the delays on this plug-in are very realistic sounding and is modeled after a number of classic stomp boxes. You can get a bunch of different delay sounds from slapback to sweep to standard delay. It is clean sounding and has become a favorite of mine when using delay. I would compare it to the Bomb Factory Moogerfooger Analog Delay and the Massey TD5 delay. All three are great delays in about the same price range. I like different things about each of these plug-ins, and I would say that Echo Farm is the most diverse of the three. It definitley has a wider array of sounds than the other two and while it doesn't have as warm of an overall tone, the variety of tones on the Echo Farm are top notch and makes it a great overall plug-in.
Did you find this review helpful?yesno
Cookies help us improve performance, enhance user experience and deliver our services. By using our services, you agree to our use of cookies. Find out more.