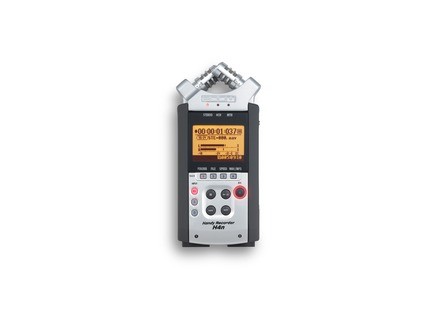 View other reviews for this product:
WHAT WE SEE OUT OF THE BOX

The Zoom H4n is described as a handy recorder (hence the "H"). It's a pocket-sized unit about as long as today's bigger smartphones with about thrice the thickness, capable of recording four tracks. It has four channels available for recording, two of which are dedicated to two built-in condenser microphones. The other two channels come in the form of two combo XLR/TRS input jacks. The unit can be powered via an included wall-wart power supply, USB bus power, or two AA-sized batteries. It stores data via SD cards and will accept cards of up to 32 GB in capacity. A brand-new Zoom H4n will come with a protective plastic case, a windscreen, the previously mentioned wall-wart power adapter, a USB cable, a 2-GB SD card, and a Cubase LE 5 CD. The front panel shows us the familiar transport controls, mute/arm switches for built-in mics and input jacks, and a big monochrome LCD screen. The right side panel shows independent controls for output and input volume levels, menu navigation controls, and the SD card slot. The left panel reveals a headphone output, AC adapter input. When opening up the battery cover, you will see the small "Stamina" mode switch.

The Zoom H4n can function both as a standalone recorder or as an audio interface once connected to a computer via USB. As a standalone recorder, it can function in three modes: Stereo (default), 4-channel, and Multitrack. When used in one of these modes, the recorder is capable of recording audio data in WAV format of up to 24-bit/96-kHz resolution. To save SD card space, one can also set the Zoom H4n to record in MP3 format. However, I would advise against recording in MP3 format if you want to get more professional sounding results or if you want perform further mixing and editing of the audio files after recording.

Stereo mode is pretty much straightforward to use. Upon turning on the Zoom H4n, it starts up in this mode and you can start recording immediately. Hitting the record button once will activate the microphones or input jacks but will not start the recording process. At this stage, you will see the record button's border flashing a red light. This step provides the opportunity to check microphone input levels, allowing the user to adjust the levels and ensure that there is no clipping. To start recording, the user must hit the record button for a second time, and the light will stop flashing. In this mode, the user have the choice of recording via the default microphones or external microphones connected to the recorder via the XLR/TRS input jacks. To be able to record using the built-in microphones and the XLR/TRS jacks simultaneously, the user must switch from Stereo mode to 4-channel or multitrack mode.

In multitrack mode, one can record four mono tracks simultaneously, a function very similar to vintage TASCAM 4-track tape recorders. A user may also set up two mono tracks as a single stereo track. One thing that's very good about the Zoom H4n's multitrack mode is that it is possible for the user to perform a variety of recording studio/DAW functions such as panning, EQ, and inserting effects, functions that are certainly very useful for creating professional sounding recordings through just the use of the recorder itself. There's also a variety of effects that a user can insert into each track, most of which mimic popular effects pedals, guitar amplifiers, or a combination of both, which is quite handy for users who would like to plug in their guitars directly and start recording.

As an audio interface, it is a plug-and-play device that will record at a maximum of 24-bit/48-kHz resolution. It is immediately recognizable by many DAWs such as Cubase, Ableton Live, and Logic Pro. While functioning as an audio interface, one may choose the built-in mics or use the combo jacks to record using external microphones or instruments like an electric guitar or synthesizer.

I have great appreciation for the many features of the Zoom H4n and I am very satisfied with the sound quality it can deliver. The built-in condenser mics have a flat response, thus they are able to record audio without any tone coloration whatsoever, making then very useful for recording things such as lead vocals and samples. The packaged windscreen is perfect for cutting out wind noise when sampling and it also physically attenuates the built-in mics to some degree, making it easier for me to get the levels right when recording various spaces (such as a concert hall, etc.). The multitrack function is also very important for recording while away from my home facility. Projects recorded under different modes are stored separately into well organized folders inside your SD card, and so it's easy to organize everything you record with it.

Now, here's what I don't like about the H4n. First, the protective plastic case provides a snug fit for the unit, therefore you cannot fit anything else. This will require you to have another case or bag for it in order to fit all the accesories you might use for it. Another thing is that navigating the menus needs a little bit getting used to. Lastly, some functions such as importing stereo tracks into a multitrack project is not straightforward i.e. you need to manually convert two mono tracks into a single stereo track before you import your stereo audio file. Overall, I still do think that the Zoom H4n is a very useful handy recording unit for the musician who's constantly on the road.

CONS:
- Included plastic case only fits recorder, requires another bag or case for accessories.
- Menu navigation needs getting used to.
- Some features are not straightforward.