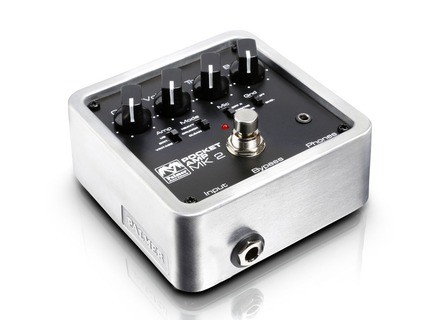 Value For Money : Excellent Audience: Anyone
SOUND:
It may be small, but Palmer’s Pocket Amp MK 2 produces some very decent tones, as demonstrated in the YouTube demo below:

With dynamics of a tube amp (although it may not be 100% authentic), the MK 2 produces some rich harmonics and note detail, but what first jumps out is the quality of the dirt or distortion, particularly with the Modern British and USA models (both of which provide tones from clean to hard-rock and metal). I’m jumping a bit ahead, and so be aware that there are three amp models besides the two just mentioned, the third being a Vintage (Tweed-style) amp. If you’re looking for a clean amp simulator, this one definitely is of good quality and accepts dirt pedals rather well (the others like dirt pedals if you don’t go too crazy on the MK 2’s Gain). I don’t find this version of the Vintage Tweed as jangly or trebly as an actual Tweed, which is good to my ears (apologies to Tweed lovers), but it is bright and clear without sounding harsh. On that note, I found the Treble pot to sound a bit harsh once you push it around 3-o’clock or more (although I rarely found need to get the treble up that high).
The sound of each amp can vary considerably, depending on all the possible settings (which is true of any amp). There’s a Gain knob, which really packs a nice grainy punch to any of the amps, but with each amp you can select a Mode: Clean, Crunch and Heavy. Not only that, you can produce a tighter clearer sound with the Classic Mic, or get more mid-range and treble with the Centre Mic, or perhaps something less harsh and with more mids with the Off Axis Mic. The demo video goes into each of these aspects. Also, the MK 2 does have a Ground Lift if you happen to notice some hissing or noise when working with grounded pedals.

OVERALL IMPRESSION:
The MK 2 is very affordable at about $129 USD, and that price gives you three amplifiers (and three channels each) with three different mic setups that can be run to a clean amp, a PA/Mixer or your computer. It can be used as a distortion box, as an amp simulator or a DI box when bypassed. As well, Palmer’s Pocket Amp MK 2 can be used as a private practicing device ready for headphones. There’s a lot of punch in this little package.
A decent sound with a significant range of tones, there’s a lot of experimentation as you adjust the Gain and select among different Modes and Mics. Although it may be argued that the MK 2 not ‘tube-like’ (why compare it to a $1000+ amp?), the MK 2 does produce some very usable tones in recording and play. The Vintage has a very pleasant and clear quality, whereas the British and USA modern models both have a superb distortion that is gritty and cuts through the mix. The Pocket Amp MK 2 also takes pedals rather well. I’ve played with pre-amps and amp simulators that are better in some respects, but often at double or triple the price – then again, the MK 2 has more options than many other pre-amps so that you can achieve a lot more sounds. All in all, a worthy purchase and a device the average gear-head will make use of repeatedly.

EASE OF USE:
Initially there may seem to be a lot of switches and knobs on the MK2, but once you know what Amp you want to use, the rest falls in place rather easily and you don’t have to tweak too much. The Vintage selection is pretty straight forward and you’re going to get a rather clean amp, although it does break up nicely if you crank the Gain and go into Heavy Mode. The British style amp has more high-mids and highs, (a grainy distortion) whereas the USA style amp has more low-mids and fewer highs (more bottom end). Of course you can alter this by tweaking the Treble and Bass, but those are the general characteristics when choosing the correct amp for your sound. The Mode selection is pretty straight forward if you think of it as a three-channel amp… clean, crunch and high-gain (although Palmer calls it ‘heavy’ on the MK 2, and likely because the crunch can sound pretty high-gain in some instances). Choosing a Mic also is straight forward as the Classic gives you a clearer sound with some nice mids, whereas the Centre Mic (aka SM57) produces more high-mids and treble and the Off Axis reduces some of that harshness for a smoother outcome. In that regard, when selecting an Off Axis Mic, you may need to turn up your treble if you find it has too much low-mids, or perhaps more bass if selecting the Classic or Centre mics. Obviously experimentation is paramount as it also depends on your guitar and its pickups, other pedals you’re using, etc.

Also worth mentioning is the Aux In, which allows you to hook up a CD or MP3 if you want to jam with some music, and the XLR Output allows you to go direct to a PA or Mixer (you will need to turn the MK 2’s levels down and adjust volume accordingly). Of course, you can use the ¼-inch jack output as you normally would and go into an amp or direct to your computer for recording.

RELIABILITY & DURABILITY:
Encased in a die cast aluminum chassis, the MK 2 is of moderate weight, but plenty tough. The plastic knobs produce a very smooth and high-quality turn and the selector switches (Amp, Mode, Mic and Grd) all have solid clicks when moved into place. The footswitch seems ‘slight’ in its construction, although the ‘click’ is obvious when engaging and disengaging. The guitar’s input is in the front of the unit, off slightly to the left of the footswitch, and so if used on stage I would opt for a 45-degree cable end to keep any wiring as close to the chassis as possible and to keep a foot from stomping on it. The other inputs and outputs (power, aux in, XLR out and ¼-inch out) are located in the back and far from harm. The cable placement makes the MK 2 pedal board friendly, as well as its smallish size. The headphone jack is located in the top front right-hand corner, which is not an issue as headphones would not be used in a band setting and damage to the headphone chord or the input jack is unlikely as a result. The MK 2 can operate on a 9v battery, accessible from an easy to open door on the bottom, or via a standard 9v power supply (30mA).
Did you find this review helpful?yesno
Cookies help us improve performance, enhance user experience and deliver our services. By using our services, you agree to our use of cookies. Find out more.