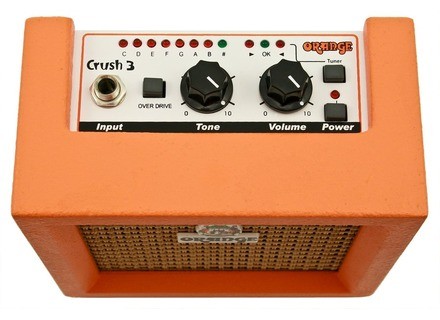 Buy this productView price information >
View other reviews for this product:
The Orange Amps Micro Crush is a mini guitar amplifier that is designed for practicing on the go. The amp delivers just three watts of power and has a really small speaker obviously, although I'm not sure what size exactly. There aren't too many characteristics here to discuss since it's such a small amp, but it does have a built in tuner which is really cool. It also has just a single 1/4" input...

Even if the Orange Amps Micro Crush is your first amp, everything on here is super easy to use. It's got knobs for volume and tone, as well as a button for built in overdrive. It also has a built in tuner with LED lights that show you the note you're tuning to and how far off you are. The amp is definitely easy enough to use where a manual isn't needed.

To date I've only used the Orange Amps Micro Crush for messing around and practicing, but would definitely like to try it for recording in the future. Little amps like this can sometimes give a big kick in terms of sound in the studio when mic'd close up. The overdrive isn't as biting and full as that you'll find on larger Orange amps, but were you really expecting it to be anyway? It's awesome that it has some drive in here at all, and it actually doesn't sound bad at all. I used mostly the clean sound on here when I've used it however, which comes in nice and crisp. If you're running it with a nine volt battery, be aware that as the battery drains your tone will change a bit as well.

Those in the market for a mini portable guitar amplifier should absolutely be aware of the Orange Amps Micro Crush as it's probably the best mini amp out there. It's about the same price as similar amps made by Marshall and Fender, but in my opinion has the most realistic sound and most options. The tuner is a huge plus as you can spend this amount of money on a tuner alone if you wanted to! This amp is great for beginners looking to get a small practice amp, but also works great for players on all levels just looking for something portable. The Orange Amps Micro Crush is up there with the best of it's kind!
Did you find this review helpful?yesno
Cookies help us improve performance, enhance user experience and deliver our services. By using our services, you agree to our use of cookies. Find out more.