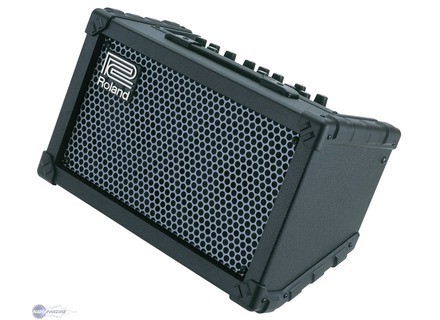 the +: 2 inputs with effects and equalizers independent LR06 battery operated, amp simulation, integrated tuner, 5.2 Kg, (Kensington lock point ... to hang up a time that we qd we play spades!? )

the -: no output lines, damage, this could have a nice little amp back or allowed to send the sauce in a mixer, no effects loop either.

Use battery-powered, well, a good ten hours with 2300mAh (a careful look at the capacity of rechargeable batteries you buy and nb: in the manual it says that it should not be used with rechargeable but we will not buy batteries every other day ...!)

It's a shame not to provide an automatic battery recharging qd is connected to the area as small HarleyBenton example.

The HP is very directional and with a small air it looked pretty handy ... it is placed 1m in front of his feet and facing you ... and hop it's all good.

The only criticism I would make is that the lack of character and will not necessarily good instrument, it gives the impression of a tin perfectly amplified ... qd but it's still very very very good, both on acoustic than electric.

The amp models are good (except the acoustic guitar simulation, zero). I especially like the "black panel" for clean sounds.
In saturation it sounds good but the grain does not really suit me ... but it is probably more than my guitar

Other than that, nothing wrong it is very good and better than the Microcube eg. (No buzz already in the grave ...) Probably due to its broader HP and larger and better quality (6.5 "Neodymium)

Overall, there is no breath, unless it grows strong gains by increasing the saturation or volume in "micro". A very positive point. (... We often forget to turn it off ... since we do not hear it!)

Do not count an entire neighborhood awake in her clear, but it's more than enough to break the ears of a group of friends. In saturation, the volume is impressive: Correct simulation, gain fully, impossible to mount the volume knob more than 1 / 3 without losing his eardrums!

I use it for a few weeks it fits perfectly with what I needed and I use it mostly on batteries. I bought a Microcube but it did not suit me really ...

Roland makes it a tip-top for the use to which it is intended: on batteries LR6 amp with two inputs with independent effects. Made to be used with nothing other than the two instruments or microphones.
If you do not need these features ... go your way there as well to see better for less (in terms of portable sound system), for example in VOX DA Series.

At € 266 it's still a bit expensive in the category of small portable amp but it is quite complete and of excellent quality.

This choice I would do without hesitation.
See the source
Did you find this review helpful?yesno
Cookies help us improve performance, enhance user experience and deliver our services. By using our services, you agree to our use of cookies. Find out more.