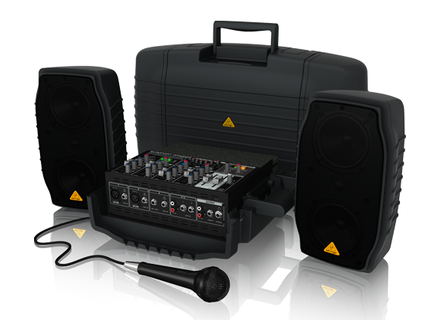 Value For Money : Excellent Audience: Anyone
Buy this productView price information >
Best uses: solo performers, small ensembles.
I use this for both. I have used it at block parties, open mics, and even on parade floats. It is a very dependable unit which produces a large amount of sound for such a small size.
I have used other portable PAs as well as some larger systems--but this is my go-to for small ensembles and solo performances.
PROS:
(1) Small size. Speakers and mixer weigh less than 30 pounds and is about the size of a medium sized suitcase.
(2) Powerful for its size. This thing cranks out 200 Class D watts [100 watts x 2 channels]. The first PA I ever owned only cranked out about 60 watts, weighed 3 times as much and took up four times the space. Although it is lower powered than many other portable units from other manufacturers, it also costs less totally and in terms of cost per watt/volume units. It is also lighter--a significant factor when a performer has to be his/her own roadie.
(3) Because of the small size of the speaker cabs, one can use mic stands as speaker stands.
(4) Mixer control layout. This has faders instead of knobs for controlling the levels. My 45 years of experience in sound engineering makes me consider this a better means for fine control than tiny little knobs.
(5) Three-band [hi, mid, lo]EQ on each channel. Most competitors only offer two-band [hi, lo] or a single "Tone Control" knob.
(6) Seven-band EQ in the master section with proprietary FBQ function [behringer's means of feedback detection and isolation]
CONS
(1) The included speaker cables are only 12-foot each and are not well constructed. This is a minor consideration since Hosa makes some quality cables which are not very expensive.
(2) Only two mic input channels. While this is good for solo performers, if one uses this for small ensembles, an external submixer is a necessity.
(3) No pan/balance controls on the channels. Considering this has stereo amplification [as evidenced by two amplifiers and separate l/r faders for master output levels], this really sucks. However, using a small external mixer
Did you find this review helpful?yesno
Cookies help us improve performance, enhance user experience and deliver our services. By using our services, you agree to our use of cookies. Find out more.