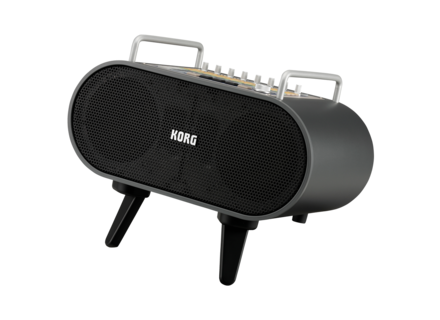 Korg presents the Stageman 80, a sort of mix between a guitar amp, a portable PA system and a groovebox.

The Stageman 80 is a sound system equipped with two 40W amps and two 4-inch stereo speakers. It is claimed to deliver impressive volume levels, able to cover a small or mid-sized performance venue, a listening room or even a live street performance.

The sound is said to take advantage of the high output, extending from a tight low-frequency range to an extended high-frequency range, and to be tuned to provide a well-balanced and natural tone.

It is also equipped with a number of rhythm patterns that take advantage of Korg's "Real Groove Technology", which is said to allow natural and musical-sounding phrases to be generated at any tempo. A total of approximately 3GB of rhythm loops are included, covering a range of 24 genres such as 8-beat, 16-beat, unplugged beats such as Cajon, rock, jazz, and boss nova, with two variations for each genre. There's also a memory function, allowing users to register their favorite rhythms and playback tempo, as well as a chain function that allows connecting individual measures of rhythm styles, letting the user create original drum tracks to suit any song.

It also features SD-card based recording and playback functions (with adjustable playback speed), a mixer function (including a mic input, two inputs to connect a guitar or bass, and an AUX input that supports line-level stereo output from devices such as an iPod or keyboard) with 2-band EQ. A tuner, metronome and footswitch control function are also included.

Korg's proprietarily developed virtual surround technology "Acoustage" is also featured in the Stageman 80. It is meant to produce a wide stereo effect, supposed to give the impression that the sound is being heard from positions that are widely spaced to the left and right.

More details at www.korg.com or at the MusikMesse, booth E26 in Hall 9.1. Availability is expected for this Spring at a US MSRP of $499.99.