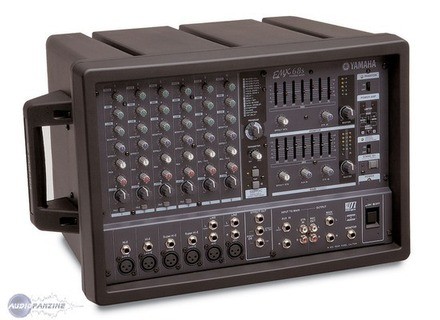 EMX68S, Powered Mixer from Yamaha in the EMX series.

While looking for a backup or replacement amp/mixer for our mains, I found this barely used unit from MHZ Studio on Ebay. After tossing a coin, I put in my winning bid at the last 5 seconds of auction close for $291.00US incl shipping.

The obvious thing to like is that your mixer, amp, fx processor and EQ are already plugged into one another and sitting in a relatively light ( apx 40lbs), attractive charcoal color abs enclosure - so setup and troubleshooting time minimal.

This unit sounds great!! A higher fidelity sound when set flat over various eq'd Peavey mixers we were using. It has 3 way eq on each channel, plus a separate 7 band eq for mains and monitors- Although we just run vocals and acoustic guitars on this unit - We drive Peavey SP5G 15" 2way mains( 250w rms@8ohm) with enough volume for small outdoor gigs and small (50 people)to medium size( 500 people max) venues - room dependent of course. To keep feedback down - we moved from an SM58 to an EV 967 vocal mic which seems to lack fidelity on our previous boards, but sounds great on the Yamaha.

The unit has the ability to send to powered mains as well, so, you can use the internal power for monitors while sending to you powered mains or if you want to use a different external amp.

The 68s has footswitch inputs for both fx on/off and tap.


The Clip limiter is a good thing to have, but we have experienced times when the unit brick walls the mix when something like a heavy palm muted "chicka" sound is being put out by an acoustic guitar. The whole mix just drops out for a slit second. Bare in mind we were playing out doors with the mixer main volume set at 8 out of possible 10.

To compund this issue - the built in FX don't offer a compressor/limiter. So you need to be cautious and have your absolute maximum input volumes in line so as not to engage the power amp output limiter.

The FX section uses a rotary knob that points to microscopic print defining the effect number that has to be referenced via a chart of equal fontsize that sits above the knob.

Haven't dropped it on the ground or in deep water -so I don't know if it will float or withstand impact - it feels solid and looks well built.

For it's retail price point you get a great sounding portable powered mixer that will handle most acoustic act applications,and small venue band applications. Having a " band break" switch is cool so if you run pre recorded music between songs or sets - you can mute the mic and instrument inputs. This unit runs cool and doesn't consume excessive amounts of power.


Having LED's on the EQ section with a feedback detection system like the comparable Behringer would be a nice addition as well as a discernable digital readout for the effects section.

We love the sound the ease of use - good product.