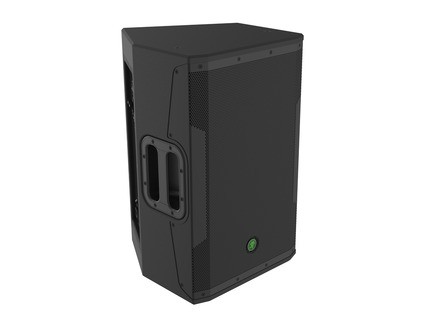 Value For Money : Excellent Audience: Anyone
Buy this productView price information >
I only bought it this very week, this is more of a first experience than a real review. I'll edit this post as I get more experienced with it. I'll compare it with the QSC K10 that I own and soon also to a friend's FBT Promaxx 14A.

To begin with, the first impression when unpacking is good, quality seems good, Mackie says it is built like a tank and it sure does looks sturdy: a good point! The enclosure is made of wood and the coating seems less fragile than that of my QSC, another good point (QSCs really are really scratch-sensitive).

The height and weight are compact for a 12" enclosure: 17kg. This is less cumbersome and heavy than the QSC K12 (whom they are direct competitors). As far as size and weight are concerned, they are in between QSC's K10 and K12.
Yet, the Mackie model is deeper due to its 60° inclination for use as a monitor loudspeaker, there is a rather protruding slanted side, the only cloud on the horizon regarding its dimensions. However, due to its inclination, it works wonder as a live monitor. It's also missing notched, easier to set knobs.

There's a handle on each side so you don't really feel the 2.3 more kilograms compared with the K10 since you lift it with both hands.

Connectingwise, it's just like the QSC: 2 combo XLR/Jack plugs, with independant volume controls and an RCA in. Regarding the outs, a there's a Thru to allow chaining cabs while being able to choose between mixing channel 1 alone or both stereo channels.

In addition compared with the QSC, there is a 4-band feedback destroyer, which I haven't had the opportunity to try yet but can sometimes be useful in monitoring use.

The DSP includes 4 settings: PA, to be used with a subwoofer ; DJ, for use without a subwoofer (so bass sounds are amplified) ; Monitor for live monitoring use (more neutral, less bassy sound); and finally Solo, to plug directly a guitar and mic in for instance.

Unlike the QSC, there is no fan in the back, so it it a little less noisy (even if the K10's noise level is not a real problem anyway).

It sounds good, and how powerful!! I still compare it to the QSC K10 (which are already very good). More power, a little less distortion and a little mort bass (quite logical, it's a 12").
3 to 5 more dB with a similar sound diffusion and a great headroom. Mackie announces 800W RMS, I can believe that since the QSC K10 are sold for 1000W in digital (so roughly to be divided by 2) and the Mackie for 1600W.
Frequencies are well defined and it's a little less shrilly at high volume as the Mackie goes lower: 49Hz, to be compared with the QSC K10's 60Hz, the K12's 52Hz and the FBT Promaxx 14A's 45Hz (but this one features a 14" speaker).

In a nutshell, the QSC K&à and K12 are excellent as everyone says, but these Mackie don't prove unworthy at all and are currently a little cheaper than the K12.

Now as far as reliability is concerned only time will tell, at a certain given period Mackie suffered (justified) criticisms in that regard. The QSC are very reliable, 4 years of use and still working perfectly... I think Mackie have learnt from the past and are back to the front stage with well-conceived products at more than correct prices. Granted, these are made in China (just like the QSC by the way), but this is also the case of Apple products which quality/reliability are proven.

EDIT from May 2015:
Still very happy from these speakers and with an additional mono subwoofer that's heavy material! We have tried it with my band (drums, bass, guitar, keyboards, male and female singers) in 2.1 and everything is there! The subwoofer is powerful, quite precise and not -so- heavy (29 kg!). There's largely enough power for an indoor show with 300 in attendance, and no noise unwanted or distortion, it's loud but agreeable. We were driven by a QSC Touchmix 16 mixer (an excellent mixer with no noise by the way...). For outdoor, I believe at least 2 subs and 2 satellites should be considered for more headroom. But indoor, for small rooms with not many people (200 or less) the two satellites should be enough, and just in case xompleting it with an additional SRM 1850 will suffice.
Did you find this review helpful?yesno
Cookies help us improve performance, enhance user experience and deliver our services. By using our services, you agree to our use of cookies. Find out more.