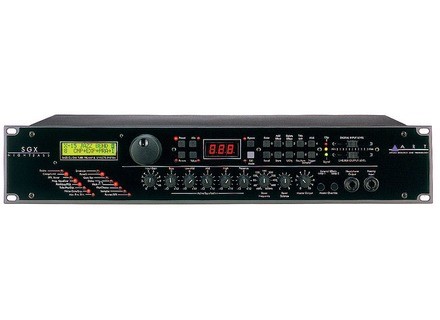 The unit is 24 bit and has great sounds on it. Has a lot of sounds that you actually use and not so much of "crazy" sounds. I use it for guitar actally and not bass. I sounds soooo good! Especially the distorions because they are not so "shred and tear" like most guitar effects. When you plug a bass into this bad boy it rocks!! You get awesome bottom end and can model ANY sound that you want. To me... this processor is too good for bass and should be used for guitar. Also what I like about it is that it has some good drum reverbs and effects on it also. I never used them, but it's nice to know that they are there. This processor sounds very nice through my original 1970 fender all tube amp

One major minus! I have to keep the noise gate cranked because its so noisy! I really gets my nerves but it sounds so good..that I keep it. Also on the used unit we bought...the one of the outputs on the back have got a short in it or something.

What can I say..."very fragile material." Don't throw this thing around...even though I did. I has tubes and is very breakable. However the one I bought a couple years ago has had no problems except for the noise. The used one we bought is kinda making me nervous though.

This unit sounds AWESOME and is very very very programable. And when matched with the X-15 pedal its unstoppable. However...be wary of the dreaded noise. I called ART and they weren't very much help at all. ART's customer service reicks. Anyways...the noise is alot worse on guitar than it is bass.