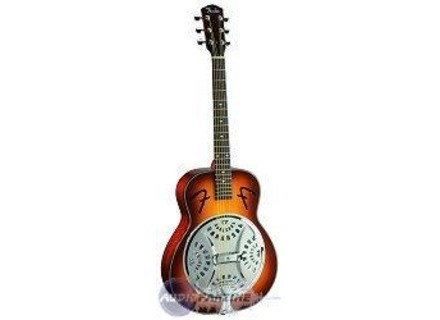 FR-50 Resonator, Resonator Guitar from Fender in the FR series.

View other reviews for this product:
This little bug comes from the rising sun. Unless I am mistaken it CORT that makes this guitar for Fender least that's what I told the store or I bought it.
Otherwise it's a dobro Wood / Metal resonator with a fairly effective, the handle is round which makes the use more versatile than a "square neck". The varnish is so thick scratch as it is cheap ... The table is the vulgar plywood with a sheet of veneer to make it more beautiful. Yes the price should not dream ...

The handle is nice, for access to acute bein's like all the guitars with no cutaway. Nothing to say. It holds the tuning well.

Once the animal is interesting because it sounds to slide as folk and is versatile enough that it is not his calling ... As against the reso tends to vibrate with sounds parasit not too pleasant, but may be should I be re settle early because I did not have these problems.

I scratched the last 4 years, and although she equated in any way my Martin HD35, or my old GIBSON LG0 I am very attached to this guitar, for some reason ...
I tried other styles, including a GIBSON DOBRO that sounded worse. I also had an all-metal dobro "TANGLEWOOD" I sold because it did not sound as though this small unpretentious Fender
A try before you buy, it's not a remake but I NATIONAL STEEL purchase and will not be able to part with it.
See the source
Did you find this review helpful?yesno
Cookies help us improve performance, enhance user experience and deliver our services. By using our services, you agree to our use of cookies. Find out more.