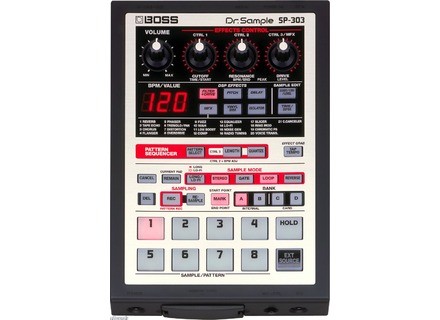 SP-303 Dr. Sample, Sampler from Boss in the SP series.

View other reviews for this product:
Virtually all adj t CHARACTERISTICS said about the sp-303. Therefore rsum polyphony Reduces (only two samples simultaneously with a Stros effect), the converters are impeccable for live, but too much just for the studio (a luck: this sampler is just done to live!), and the effects are of the same barrel (the word "effect" takes on its meaning: no question of the shade).
The internal memory is limited (32s in Stereo 44kHz), and I t even surprised that there was no progress over the cot the old sp-202. Boss could make an effort, especially when we know the progrsralis in this area within five years ... dernires Fortunately, there smartmdia cards, and can be stored! I tried a 128 MB is Royal (see FAQ).
Regarding connectivity, the minimum is not the vritablement scne the ddi (CINCH), and it rvlateur this sampler is a bit on the fence, between the live and the home studio. Otherwise, we can not gure ask for more considering the price, but a MIDI THRU could be of service, and I rve every day I / O SPDIF ... and between a micro symtrise ... In addition, the headphones blows a lot ... but hey, to live ...
When the possibility of use in computer music, and it is unfortunately restricted btement. Indeed, the sp-303 offers an import function that allows you to convert samples. Wav or. Aif format as a landlord. Spo. Trs is good, but it does have a lot more sense to entrust the handling a soft, she would have t much faster, especially on p would grate the best of the capacity smartmdia card. Because after conversion by the sampler, the card contains the sample in duplicate in two formats DIFFERENT (original and. Spo). This idiocy limits the use of the card through the computer music-third of its capacity (the format. Spo format is a lossless compression). Hence my bad grade!

L also said t everything or almost. It's easy and intuitive ... apparently! Ds because we try to exploit all the possibilities "instrumental" in the SP-303 is complicated ... trs and becomes INTERESTED. We can play with effects, but also with the internal squenceur (if only one cut the mtronome!) By adding or removing samples in a "super loop". Anyway, from his ancestor sp-202, there is a great evolution in the direction of crativit. The edition of sounds is also a little ahead (the old silent close to the by no means absolute in this area ...) but there is still no basis to normalize the samples .. . damage.
The Manual: nothing wrong, except that it is unfortunate that it is not a good relay by the manufacturer's website ddi ...

Again, this sampler is ddi to live, and has it "sounds" quite as it should have if only one not afraid to light continuously lit light saturation trstt by prcaution (the problem already exists with the sp-202, but the importing normaliss samples, it is obvious). The effects are impeccable for the "anecdote" and it has everything!

I use it for a little over 6 months, an APRS exprience one year with an sp-202. The passage of each other made me the effect of libration. Despite its few default, the main ones for me the lack of software for PC / Mac connectivity and "cheap" I think it offers a lot for that price. I love the storage card smartmdia standard, the quality of chantillonage and control with MIDI VLOC. I am a drummer, and I set in my Intgr by ordering a set of pads. But I use it also for that express eyeing the cot Electroacoustic music and improvisation, and has, I love his cot "instrument". I think that was not my last sampler, but first, I did not want to invest more, and I find it almost perfect for my work use of computer music live. It's not tomorrow that I carry around a computer on a scne. Moreover, from this point of view, the concept of "autonomous sampler with batteries and micro" the sp-202 I miss a little, and it's a shame he did not volumes to the removal of the micro benefit from a symtrise and to the possible addition of a rechargeable battery instead. For me, the more use is flexible, the better the tool, and be honnte I am happy with the plutt sp-303!
See the source
Did you find this review helpful?yesno