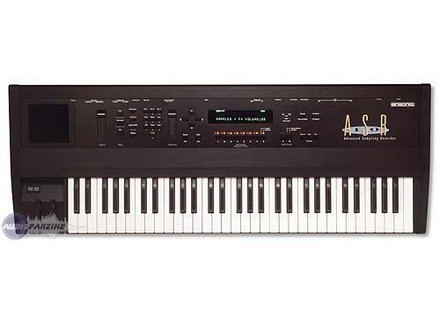 View other reviews for this product:
Very satisfied. has a super easy sequencer (use the pedal...its cool) and the effects are the best i've heard in a keyboard. only thing missing is probably the wave editing features and more sequencing tracks and outputs (16 would be nice)

That really depends on the person and this board is fairly old now. it does not have the editing features that the new joints have so that may hurt most electronic muscians. this board works with you and not against you. for me.....it lets me express what i need with all the power it has to do so.

for a gig......no way!!!! but then again it depends on the type of music you play.....if you play keys (like in a band or whatnot) then i say yes.....but if you do hip-hop and you play your sequences on this board then you are in big trouble!!! you have to save all things to disk and it takes a few minutes to load all the sounds of a sequence (or song) and that is murder to a hip-hop head! for a live gig (band) you can pre-load all the sounds (up to 8) and then you can swithch between them very easy. never used customer support.

Superb (no real hiss)! it really has no sounds in it but the sounds that came with it are cool to start with (i make hip-hop and new age) but the excellent thing about this is that you can load so many libraries from other models.....so nice! as i said above...the effects are great! i would like more outputs with out the expander (cost like 250 bucks!!) like 16 outs would be ideal....but probably not gonna happen!!!! (lol)

I have used and purchased many a board and nothing really comes close to the asr-10! i have a motif and i dont even mess with it much but to sample from (into the asr) or just use it for background textures and what not. if you are looking to have a tight package for production of hip-hop, this is probably the best on the market still......remember that its near 20 years old (according to the manual)

originally posted on futureproducers.com
posted by: unknown (january 1-, 2003)
Did you find this review helpful?yesno
Cookies help us improve performance, enhance user experience and deliver our services. By using our services, you agree to our use of cookies. Find out more.