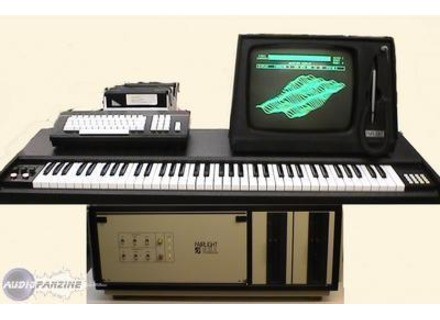 View other reviews for this product:
The CMI I, II, IIx are machines that have a polyphony of 8 notes.
Each note is a sample (sample) or a re-synthesis of sound. The size of each sound is 16KB, and yes 16384 bytes!
The beach sample is limited in the range 2500Hz to 32000Hz.
The connection is the professional type that is to say: Balanced XLR.
It incorporates the first commercial software to track sequencer Interactive, the famous "page R" is an 8 track sequencer that uses n and all pages can be edited with the wand (lightpen).
There is no real effect as it entant now (like DSP) capabilities, but loops pseudo echo, etc ... But there is primarily against very good VCF filters (CEM 3320 and SSM 2045).
For data storage, there are two "old" players 8 inch single face (~ 512KB max per disk, that is to say, ~ 23 sounds).

This machine is a marvel of its kind to configure and use. This big box makes you want to delve into its operation, the software interface was well thought out, even if relatively complete! And "look" is mortal, we like it or not

Editing sounds is rather old technique or even primitive (must go through commands in console mode for example to rotations of the waveform) but there is always an omnipresent wand ...

The documentation is extensive but often only in English!)

Again, the machine is very easy to take over, so the documentation is useless soon!

The sounds are suitable for my style of music ... Even if they are not very realistic!
But fishing! And yes, the IJC has a dynamic of hell itself does 8bits!

There is no real effect as it entant now (like DSP) capabilities, but loops pseudo echo, etc ... But there is primarily against very good VCF filters (CEM 3320 and SSM 2045).
Hence the grain very special Fairlight, who has not heard the "Haaa" or "hoooo" MIC (in many pieces of 80-90 years). Eg ¾ sounds is the Art Of Noise ... CMI Zoolook of Jarre's a lot of CMI ...
And also many other users and other: Peter Gabriel, Tears For Fears, Kate Bush, Jan Hammer, Frankie Goes To Hollywood, Pet Shop Boys, Yes, Yello, Mike Oldfield, etc. ...

And more, the granularity of the sound it makes! III MFX MICs and no longer really a granular (8 bits), but have other interesting features!

What is more painful? Doubt is not allowed: The sound of six fans and disk drives 8''...
There is also the sponsorship side of EDF through excessive consumption (~ 700W), in fact it's a real heater! Think of air conditioning the room or the CMI will be Oh yeah it makes a sound of madness it is not to be next to be ..

Certainly if the opportunity arises is, I would make the same choice ... Besides, I want a CMI MFX III or II ...
But for this next step, I put aside Euros!
See the source
Did you find this review helpful?yesno
Cookies help us improve performance, enhance user experience and deliver our services. By using our services, you agree to our use of cookies. Find out more.