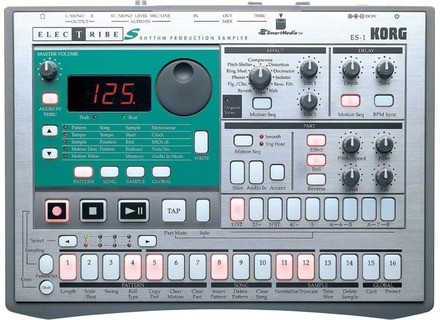 ElecTribe Es-1, Sampling Sequencer from Korg in the ElecTribe series.

View other reviews for this product:
Super easy to use.
A lot of tricks to make more vivid sequences (effects, roll, motion sequi ...)
The Step sequi is super limited, but that's what makes its strength.
Sounds are saved in FLASH RAM, or SMART MEDIA, handy for editing on computer.

Can not say the manual was in German (thank you Mr Thommann)
But there is no real need.
Limitations make the composition of small sequences electro fast and fun.

I provided quite a home studio, but I work a lot right now, the coup is the machine that most j'utitlise!!

Factory sounds blah, but it's a sampler, which means that the first thing to do is to make small sound banks.
The sound is still a bit cheap, but it's part of its charm.
The effects are varied, and the master tempo sync delay ends to bind the sauce.
Level expression is not great, it's a BAR level of 80 years.

I bought it for 330 Euros in thomman, for sequences of small electro in my bed and me to make accompaniment séuences when I play the guitar, plugged into the AUX input of my Microcube. is the ultimate minimalist Mahine, but it is finally complete enough to assure itself of electro components, provided that the head is growing and that publishes its samples on computer!!
I feel sorry for against people who do live with because it is probably not very strong! But since I perform almost my room, and mostly in bed with (!!!), I decided to jump on OCCAZ to buy the old model, before the release of the ES1 MkII, which is identical, with new samples in RAM and a metal bodywork.

I would do this choice because the value price is really excellent!
See the source
Did you find this review helpful?yesno