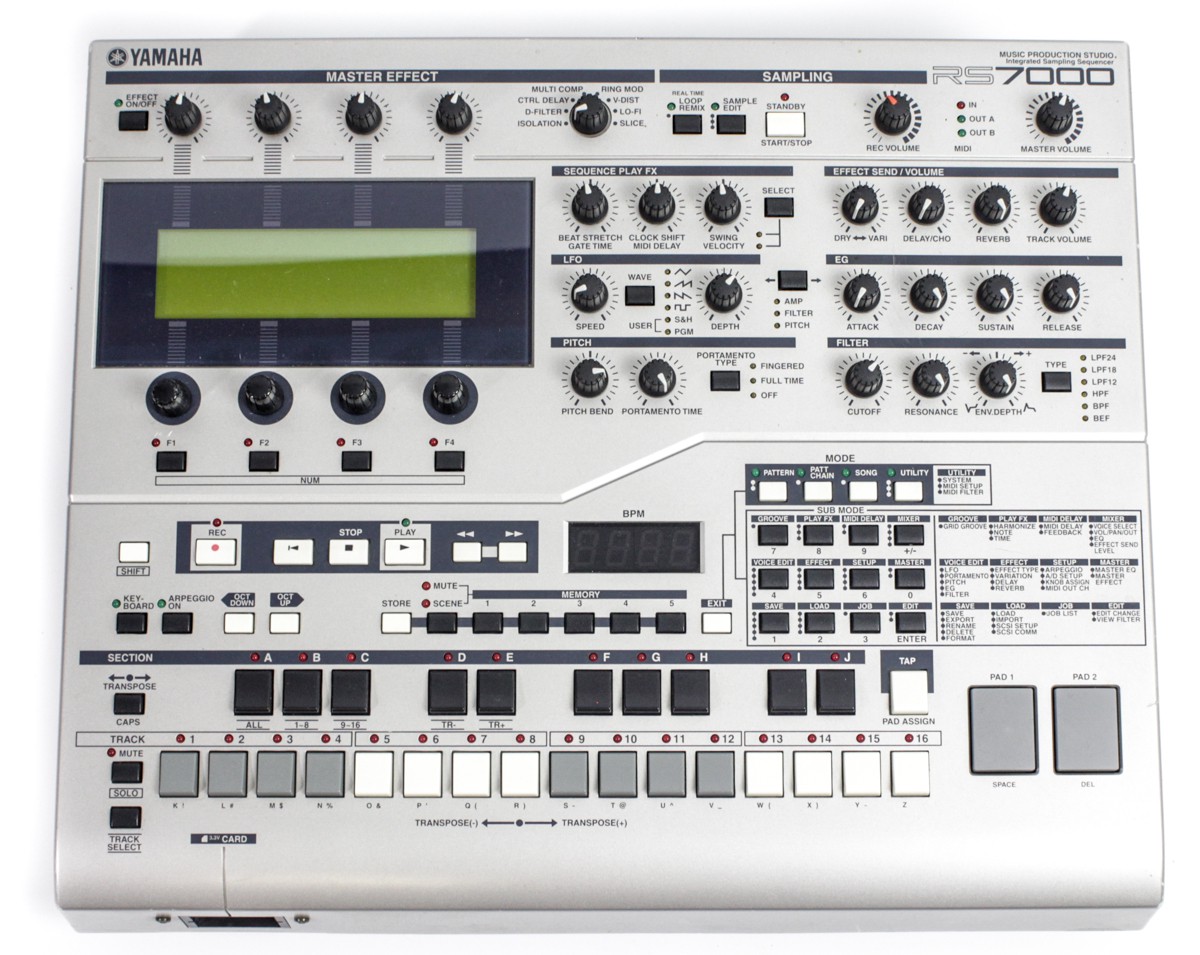 SquareWave
Publié le 07/14/03 à 05:00
Conditions:
Connectors: 2 midi out, midi in 1, stereo audio in and out, headphone, footswitch, until the all goes well, the o started going less well that&#39;s the same when scsi would have been be replaced by usb, yamaha has a gnration delay and scsi is the source of many bugs.
SmartMedia reader, format trs in vogue at the moment although somewhat coteux but I never had any problem with it and it&#39;s not too slow (even when a little)
Of knobs and buttons everywhere, this cot nothing wrong for the live is great
The screen is exactly the same as when there is a rm1x 2 cm glass inutiliss around ... it could have been much larger and readable which would not have t dsagrable edition samples for example.
And finally, two pads "sensitives" which unfortunately the sensitivity is not adjustable, making them useless little prs sensitivit for most users

Squenceur:
even when it will not until the last OS to be able to edit (and still somewhat soft Manire trs) squences the live ... What a machine to live seems the least we can do even when. Otherwise the squenceur rm1x that is the same, so trs with flexible and convenient, if one has the OS denarius, the ability to edit during the game and more. The only novelty is a button Appell "LOOP REMIX" which gnre variants of a sentence following presets rytmiques ... plain: it is a wizard who gnre composition variations (wagon, rolling, reverse ...) automatically, even bother to call yamaha has thought the lack of inspiration! Against him by the arpeggiator is the minimum possible and has not since yamaha volumes at times of the analog: no rhythm patterns. In fact apparently the mthode would be coupled with the arpgiateur loop remix function but it is definitely not intuitive and you could hardly call the composition of ca me, more research or hack, but it seems we can not really express an idea we have in head with these tools.

Synthse:
sounds and presets are varis effective, in fact it is still the same sounds that some effects of enriched rm1x sciaux but surely a better quality converter for the dynamics and bandwidth seem much better. Filters are formidable and dual filters have same t additions since the latest OS, this is the perfect cot. As against this only has one lfo by its speed and the envelope is not adjustable, so when we play on the envelope with the knobs, we play with the same rglages of envelope for a tablecloth for a percussive sound ... concrete terms the attack of a percussive sound is not working example.

Sampler:
The characteristics of the paper are also many samplers allchantes but in practice it is extremely limited. The function most intressante, and on yamaha which has the focus is the slice. It disose indeed full of algorithms dcoupe DIFFERENT quite effective, but the first dj black spot: Can not be dfinir dcoupe same points. Then all these algorithms do not replace the lack of possibility to have a loop or timestretchant pitchant automatically the tempo.
Otherwise, the sampler is minimal and has only two modes: pitch to play a sample of all the notes of the keyboard and play kit for a sample by rating, that&#39;s all. No layers, no keyrange, no individual rglages envellope or starting point, not even the possibility to read a sample backwards! Each variation of a sound in a drum kit for example should be resample, and when we see that the basic memory is expandable up to 4MB and 64MB although we realize that a lot has limited the sampler from a veritable sampler rack.

Effects
Yamaha Faithful to its reputation is on this point, the effects are numerous and of very good quality. Personally I&#39;ma fan of their distortions and effects yamme surralistes quite surprising to see! For against what is extremely damage is that is not really free to choose utiliss effects at the same time: a variation (phaser, distortion, or low prs n &#39; anything really ...), delay and reverb.
Otherwise it should be noted the effect on the master that is efficient trs and even daring: we put a little distortion on the master instance, which will delight fans of hardcore and industrial sonorits. The most surprising effect on the master is when the same ring modulator! Otherwise if your more conventional, multiband compression is very effective.

Software
The OS is fairly stable, the only crashes I have had t with scsi (classical)

Oh yeah a little caractristique that fall within any CATEGORY but will render more than one hammer: there is no volume for the metronome that is either up or blow!

Everything is simple to use, share the functions of edition ("JOB") of which are quite dense squenceur but we found it trs quickly with a little practice.

In my case, this is what I prfre in this machine because I am big fan of distortion and for that the RS is efficient trs. For industrial and hard sonorits c a must I think. One can also have more rounded sound but fans warm sonorits may be somewhat due.
If not for the game, as I disai above, the pads are not sensitive rglables not actually trs practices.

In fact I possde this machine for 6 months, I bought one before because I AVAT rm1x connaissai and I thought the A3000 and regain a little of both in the RS. But since Yamaha has announced that he would not go over major updating of the OS I think srieusement resell. Indeed there are still some bugs that are signalsrgulirement on the mailing list and especially do not want this machine promises in my opinion the sampler considering its price. Indeed, even staying at yamaha it is possible to have a configuration much more interesting to work REALLY sounds for the same price by combining a rm1x with a sampler, the only feature missing is a rm1x the edition for the game but it is so inflexible that it is not as efficient as could be ca.
Besides, I think this is the finding that one little gnral do to this machine: it could easily be much more effective if the OS had t more complete and better studied . We really feel that this machine has t output in a hurry to counter and Roland MC-909 as it has on paper particularits little prs equivalents on paper for a price but in fact less minimalism of the sampler that the RS is much less pro.
What is more annoying in history is that technically it could be really effective when trs same, but I think Yamaha does not implmente certain functions because the count implmenter in future machines more luxurious and expensive ... RS buyers may feel lss by trade policy yamaha.

Oh and then for RS that arrettent not to plant, I on the suspected scsi ... it must dbrancher of this is possible because it works poorly trs.
00