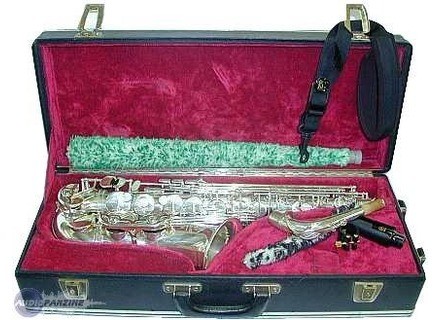 View other reviews for this product:
Salutatous
Good to go, we go to try to catch up a flagrant injustice: the Mark VII is not a damn sax! I would be tempted to plutt dfendre fervently otherwise. I use a tnor Mk VII of 1977 prs for 12 years and can not find him in default rels. It is right across the range of Sb up to serious high-pitched most shameful, it is trs homogne in the mission (may be with a "BMOL" in the register mdium -severe) and, without being a hurricane, can be described as the sound of powerful honntement trs. I tried a few Mk VI which did not arrive the ankle (so to speak) and the MODEL, trsdsavou by many musicians, possde a grain that makes him a prcieux companion for the soloist (in small learning jazz in particular), with a velvety sound trs or, alternatively, incisive trs (Steve Coleman plays a viola MKVII, eg). Probably should look in the chapter-references to the great saxophonists Bop, the origin of the reputable and the MK VI ddain for his next one. This is the bargain of the moment, especially when the alignment score of 2 MODELS: 4000 or more for the MK VI and less than 2000 for the VII: spot the mistake! Whereas especially when the shameful attitude of those who only spculer and never play. But just reward, APRS seeing MK VI climb up the peaks (I believe a 10 500 USD rcemment on Ebay!) Rating appears to be stabilizing while the MK VII takes the bull by the BTE.
A final word about my other bagpipes. A baritone Buffet-Crampon Super Dynaction of 1961, a tame wild animal, but which shows great when done. And then, little pearl rcemment dgote at a friend who was hiding under his bed for 10 years, a Selmer Alto MODEL 26 of 1929! He came back less than 1000, in other words a Misr this beautiful instrument in silver, with a spout Solost of origin (a rve, this bill) ... But I fear too many squatter this forum if I m'tale the quality of this sax. In short, I would simply say it's magic. If you come across one, go for it (especially considering its rating)! N'coutez not gossip dplorent which approximate the accuracy or usability doubtful. No Mark VI, Balanced action or Radio Improved (Reserved for Lotto winners) can not offer such a quality / price ratio. Y will not be for everyone
A +
See the source
Did you find this review helpful?yesno
Cookies help us improve performance, enhance user experience and deliver our services. By using our services, you agree to our use of cookies. Find out more.