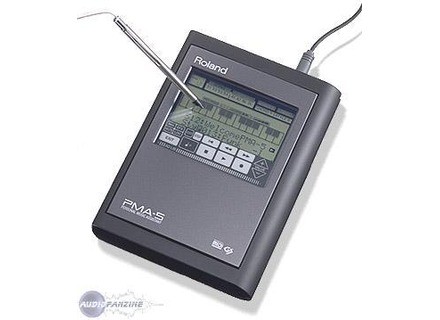 View other reviews for this product:
The Roland PMA-5 (Personal Music Assistant) is a unique portable MIDI device. I don't know exactly for what years this was made, but it has to be at least twenty years old. It's a Palm style device that sits right in your hand and contains a variety of MIDI sounds, a sequencer, rhythm patterns, and an arranger. Of course something like this is a bit outdated, but it's still a cool thing. The PMA-5 needs power from a nine volt power supply and consists of both a MIDI input and output jack, and a 1/8" headphones output. I believe it can run on batteries, but I'm not sure what kind since when I've tried it it has been with a power supply.

The Roland PMA-5 isn't the easiest device to use, but it was pretty forward thinking and is probably a little strange to use just because it's older. It's still not incredibly hard to use, it's just going to take a little messing around with. The screen is a touchscreen, which is pretty cool for such an older device. I haven't looked at a manual, but if you wanted to learn everything about the PMA-5, I'd say it's going to be required reading.

Most of the sounds on the Roland PMA-5 are general MIDI, which is in general pretty cheesy. Having said this, I don't know what more you'd expect from something like this that is of it's age. They do make portable sound modules today and I'm sure there are some devices out there like this one, but this is the only one of it's type that I've really seen. It definitely does have a nice collection of general MIDI sounds and otherwise, as well as a ton of patterns to choose from which is cool. It would definitely be possible to conjure up a little all in one track here, which is the point after all.

I don't know how easy it would be to get your hands on a Roland PMA-5 nowadays, but I would think there would be some of them floating around out there. The studio I work at has one of them floating about, but it certainly doesn't get used, or at least I haven't seen it used by any client. I've really only messed around with it just to see what it was all about, but haven't used it for any serious musical purposes. If you're after some cheesy sounding general MIDI stuff only, there are easier ways to achieve it than this. I would really recommend seeking out a Roland PMA-5 as in general it's not going to be worth much. If you can get one cheaply or just happen to stumble upon one, it's fun to play with but I don't think it's going to be a viable music making tool in the modern world.
Did you find this review helpful?yesno