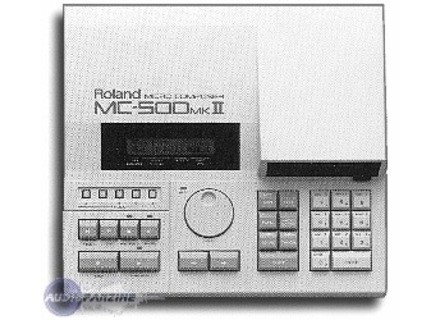 MC-500 MkII, Sequencer from Roland in the MC series.

View other reviews for this product:
As the syncro Roland is the basis of MIDI, you could say that this is the matrix sequencer for all sequencers to come.

Connection with the previous opinion, but floppy disks, can be found on the internet. Note that this machine dates from the time when a lot of people could still read music: for adventurers, 13/8 or even 23/7, the machine is willing, we must look in recent productions to find as broadminded. You can really have fun with the DC, everything is there that is more PC, apart from being busy ten things at once, and you'll burn your eyes? So: comprehensive, easy to use.

No sounds in a sequencer. But a keyboard like the old PC keyboards that can hit like crazy without damaging the switches that are under it.

Bought shortly after my TR707, I always both. Around 2005, I bought a Fantom Xa, which contains ... the same sequencer, with very few differences, the most important being the loop recording, which is not possible on the MC-500 (read only). But as I recently purchased two Akai S5000, I wanted to test a more open configuration to each his sequencer! Via my patchbay MIDI master keyboard remains, the MC-500 receives and I can decide (or not) to synchronize. Indestructible, he started with a quarter turn after a few years in its box. We grow old together.
See the source
Did you find this review helpful?yesno
Cookies help us improve performance, enhance user experience and deliver our services. By using our services, you agree to our use of cookies. Find out more.