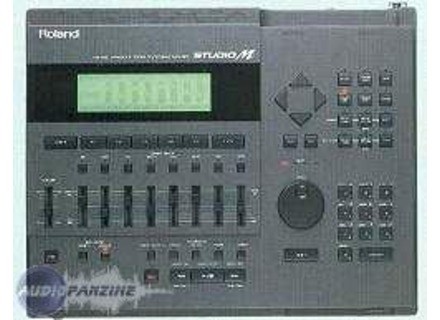 MV 30, Sequencer from Roland in the MV series.

Audience: Advanced Users
View other reviews for this product:
The MV-30 is a kind of portable studio which includes a gnrateur sound (from the clbre D-70) but in a less sophisticated effects section, a squenceur, a mixer "midi", and syncho to synchronize the squenceur with a multitrack tape (which the silent era as well squenceurs audio afternoon computer did not exist).
There is a floppy drive to save the compositions.
It possde 4 outputs strospares I think.

For addicts squenceur hardware, it is complete and trs relatively simple (but nothing to do with a squenceur software).
There are buttons for DDIS edition, and a LCD screen big enough (for the era).
The manual is complete trs, all functions are well Retailer.

The sounds are clear and clean as accustomed to Roland, they are suprieurs in quality and clarity of those Sound Canvas, I got.
The MV30 uses banks of 128 sounds, note that there is no standard bank General Midi (which n'tait not officially n the era) but you can get one via a patch rcuprer Roland, but you have expansion cards MV30 MV30-1 and-2.
The effects are good trs (for the era) and again got my suprieurs the "standard" Sound Canvas.
The edition of the sounds is possible, but it is sketchy, and it is not possible to act on the sound-rel-time via the Controller noon (if I remember correctly, because I don ' have more than 30 MV).

This is the stuff of pro trs sturdy, well suited to its era (possibility of sync with the tape recorders, gnrateur sound quality while making more reliable hardware squenceur squenceurs that the computer era).
For those who swear by the hardware is a good tool.
For other computer users, it is better for the price in opportunity, invest in a good style studio software software (Reason, Orion, or in fact any VST hte that offer the same functions but with much greater ease of use).

For my part, I sold mine ...
See the source
Did you find this review helpful?yesno
Cookies help us improve performance, enhance user experience and deliver our services. By using our services, you agree to our use of cookies. Find out more.