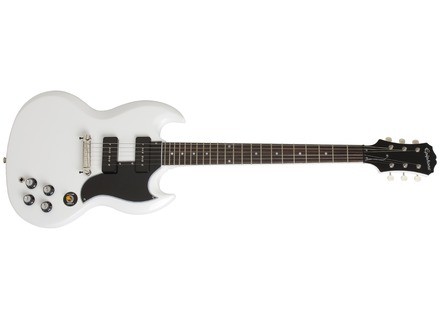 « Epiphone reissue of a classic SG »
4

View other reviews for this product:
This is an Epiphone reissue of the 1961 SG special, although then it would have been known as the Les Paul Special because these guitars were still considered the new Les Paul in 1961. This simple SG design with a set of P90s provides great tone and since its an Epiphone you get it at a very reasonable price. This guitar has a mahogany body and a mahogany set neck. The fretboard is rosewood and has 22 frets with simple dot inlays. The neck is fully bound. It has the 60s profile neck which is nice and thin. Up top it has vintage style 14:1 tuners. It has two alnico magnet p90 pickups. The bridge is a old style wrap wround bridge which the originals had. The controls are a set of volume and tone knobs for each pickup and a 3 way switch right next to them.

Epiphones SG's are some of their better budget models. I would recommend an Epiphone SG over an Epiphone Les Paul. The neck on this guitar is really nice as it is a 60s slim profile. In the name of tradtionalism they threw in a wrap around bridge. Wrap around bridges can be done right like on a PRS or like the many fully adjustable wraparound bridge but this guitar is a vintage design that was designed to be cheap back then. The standards were different back then. 60s cheap is a lot different than 2011 cheap. The wrap around bridge on this is a pretty bad design and if you are changing tunings and whatnot your intonation will be off. The bridge can be easily replaced with an aftermarket fully adjustable model.

P90s are great pickups for classic rock. They have a real raw and unfrefined sound that you do not get with a set of vintage humbuckers. This is what made this low end Gibsons so popular back then. Even though they came with the older pickups they worked well for the modern music at that time because they had a great overdriven sound. The clarity and bite of the single coil mixed with the bottom and deepness of a humbucker. This guitar has a great overdriven rock tone because of the P90 voicing.

This is a good reissue of a classic guitar. There is something wrong with paying 1500 dollars for a reissue of a guitar Gibson sold for like 90 bucks back in the day as their budget model. Some people may be willing to pay a lot of money for what was a low end guitar a few years ago but it doesnt seem too smart. This Epiphone more matches the spirit of what the original guitar was. It was a low cost guitar that would wring out some rocking tones. Beginner guitar players may not know much about P90s but these pickups sound better than most of the humbuckers you get in most other Epiphones. If you are looking for a nice Epiphone dont look past the P90 SG.
Did you find this review helpful?yesno