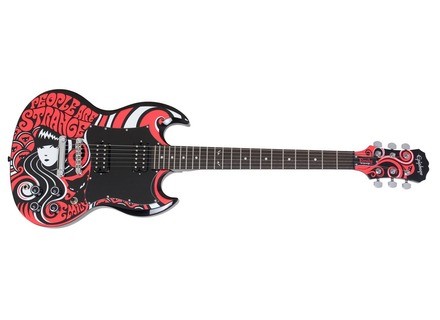 Emily the Strange G-310, SG-Shaped Guitar from Epiphone in the SG series.

View other reviews for this product:
Then it is a Epiphone SG, 22 Frets, Bolt pais round too, that the same CHARACTERISTICS G310. Dco beautiful, the photo reflte many colors, red is not red SG, Itis a little clearer, even the knobs have a nice psychdelique dco. The one I test frieze on the ropes a bit serious and not n'tait trs well rgl harmonic point of view.

So round handle but not too much, you can go fast enough it is good fun but below the box 15 Bolt because we did something pretty bad ...
As it is an SG trslgre comfortable saying anything over the ...
For sound is not bad at all, not counting the sound of a US SG is a bit worse but still good as long as we trs not seek galer that of a Gibson, it would be the forcment is not for a. As it is an SG trslgre. A little fat as it should but not too much a handle mmicro darker than round, but the bridge pickup a lot of attack.

This guitar should rev out all the big crunch and distos, cleans for a really sounds gross, a chorus would be welcome ...
I tested it on a Marshall MF350 store (because the best amp c'tait the store while it is using ...) It's good attack model makes you want to play the wholesale spot and it is quite was effective, without being ultra prcise away from her and drooling everywhere and plutt is a good point.
So a good scratch for fans of rock hard rock mtal sending but not too much in (around 350).

For résumé I test an hour in the store, I like his sound a little fat but retained even when the COD and (even if I prfr red ptant more than the strawberry-crasis), I like the handle for less Access in acute because I think its roundness is not a teachers to go rather quickly.
A good scratching Cheap worth what it's worth, since one does not seek to have the sound of a Gibson 2000 in the hands ...
See the source
Did you find this review helpful?yesno
Cookies help us improve performance, enhance user experience and deliver our services. By using our services, you agree to our use of cookies. Find out more.