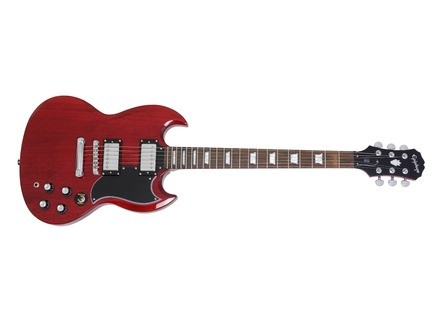 G-400, SG-Shaped Guitar from Epiphone in the SG series.

The neck is fantastic, incredible thinner than the real Gibson, it is fast and very nice. Access to the sharp, clean SG at all is just perfect, it is characteristic of these models copies of the legendary Gibson SG!
As against the guitar is very unbalanced, and playing up it will be important to continually monitor its position. But it quickly becomes natural, as it is light so it's not so embarrassing failure. And what a pleasure to move with!
The original sound is bad, the microphones are sadly pathetic at best to model G-400 standard. We must plan to change them (I installed the DiMarzio Air Classic, which is excellent). Then the problem is that the guitar goes out of tune frequently. And even if you put mechanical Groover almost nothing changes, the problem mainly from a lack of rigidity of the guitar a real shame, without which it would be possible to obtain much better results.

The G400 has a little trouble on big amps (Mesa Rectifier, D), leaving a feedback quickly in all directions, but it played in the style is not necessarily problematic distortion and it is doing very well. Marshall JCM on more traditional, she is doing much better and that's okay. As against it is not for clean sounds, do not choose for that!

The rating reflects the original pickups, that sound bad and do not pass to the limit that distortion. I use a BOSS GT-6. With microphones correct (Seymour Duncan, DiMarzio according to your tastes ...) I would put in clean 7 and 8 in distortion.

I bought this guitar in 1996, so for nearly seven years, it leaves enough of decline.

You pay the license Gibson (yes, that little logo on the head), although expensive, can be found on the market of other guitars a little cheaper and better finished. Do not flash on the brand Epiphone (or any brand for that matter), each guitar is unique and each series must be tested to be judged at its true value! In this case, many pourdre (finishing the purchase very correct, plaque Gibson) in the eyes but unfortunately an instrument that can age badly. Microphones, cabling, mechanical and buttons to change rather quickly if you keep several years.
My first electric, I'm bleeding to purchase, then customize to improve it as possible. Undeniable qualities, but a lack of rigidity and a terrible finish to aging make me doubt a little regret my purchase. It makes me a little sick to the guts down but I try to be realistic as far as possible.

I took him to the mythical form, its devastating look, being at that time (1996) not really in a position to really judge its quality by myself. And I almost regret if the handle was not so special to play.

A guitar a bit expensive, and limited life, but good to start if you want to pay the price. on the other hand it will necessarily start by changing the pickups, and if possible the original mechanical. : / So an investment plan which is better to be informed before purchasing.
See the source
Did you find this review helpful?yesno