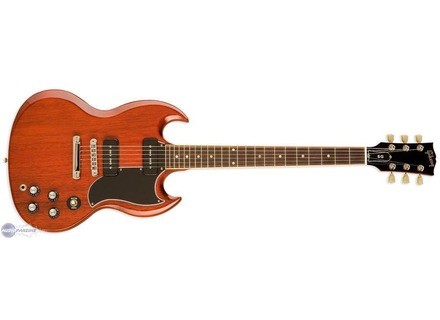 View other reviews for this product:
Gibson with their Guitar of the week series has been issuing a lot of cool guitars. With the guitar of the week series they retool their factory for a week to produce a special guitar just for one week. These limited run guitars instantly become collectors items. This guitar is a reissue of an early 60s SG with P-90s. The P-90 SG is a special guitar because back in the day it was used by many people in rock. In the early 60s Gibson was looking to lower production costs of the Les Paul. To do this they redesigned it to have a flat top and double cutaways. What we know now as the SG was introduced as the new Les Paul in 1961. Later on the real Les Paul was re-introduced and the new guitar was renamed the SG. This SG of today is exactly that, a copy of the original SG. It has the small pickguard that the SG originally came with. The guitar features the classic dual cutaway SG body with a 22 fret neck. It features P-90 pickups selected with a 3 way toggle switch and two tone and two volume knobs.

The SG was designed in such a way to give better fret access than the earlier Les Paul. The neck is not mounted as deep into the body as is with the Les Paul. This design gives it a few problems. The neck joint on SG models is very weak compared to Les Pauls or even bolt on guitars. This weak neck joint makes some SG's prone to going out of tune. With the neck mounted so far out on the body and the body being so thin and light, SG's are prone to neck dive. When playing an SG standing up you may find yourself holding up the neck due to this awkward balance between the neck and the body. The 60s SG also introduced Gibsons new slim profile neck. This neck is the preferred profile for Gibson guitars. It is a much slimmer design that can be played easily by everyone. The 50s Gibson necks were really big and many people find them hard to play.

With their thinner flatter bodies SG's tend to have a tone slightly thinner than that of a Les Paul. Some people say it sounds more like a Gibson Flying V than a Les Paul. The smaller body also helps make the tone different than that of a Les Paul. Gibson pickups are mainly designed for classic rock. The P-90s are ideal for classic rock. They are single coils so they are about medium output and have more high end bite than a humbucker. Since they are single coils they may get noisy with high gain but this Gibson is pretty quiet.

This limited edition SG is a great guitar. I wish Gibson would make it a full time model. I prefer the small pickguard SG's because you can see more of the beautiful wood. The only P-90 SG Gibson makes all the time has the large pickguard. The SG is an iconic shape and has been played by many legends throughout the years. If you are looking for a classic sounding SG with with a great look and exclusivity this SG could be for you.
Did you find this review helpful?yesno