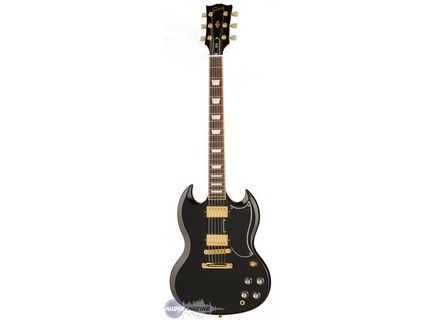 View other reviews for this product:
Made in the USA to 400 copies.
It incorporates the same features as the 61 'Reissue unlike the finish that covers the dowry of microphones and a golden fittings.
The handle is the same as an SG Standard that is a fairly round and thick equipped with a touch flat.
The pickups are the 57 Classic. To resolve them, a three-position selector, two volume and two tones.

The handle is quite surprising for the former user Les Paul that I was. I thought finding the same inning since the first models had this baptism. The handle is slightly thicker but still comfortable. You get used to.
The guitar is very comfortable and especially light.
While standing, use a leather strap which will prevent guitar from shifting any one from the top of the handle toward the ground.
Be careful with this feature, leave a lot of SG among luthiers with broken heads of the imbalance.
Access to acute complies with a guitar of this type.

Is a guitar rocker! And on this point, it lacks versatility.
If you like good rock fat, power blues and metal, this guitar is there.
It is less versatile than a Les Paul, my opinion is that we must be sure of his musical style before relying on offer.
For my part, I branch directly into the clean channel of my Mesa Boogie Mark IIB.
The pickups respond well to the attack and pushing a little volume, as dry crunch here!
To boost the signal, I add a Tube Screamer and then another booster (Electro Harmonix LPB1) for solos.
I usually use the microwave for acute rhythmic and the neck pickup for solos.

I use it for 3 years now and it replaced my SG Standard as number one.
It is a very good guitar with a violin and more at finishing because of its limited production.
I abandoned the Les Paul model for the SG because of its weight but also because it characterizes my game and my modern rock direction.
SG and I love the remake that choice with your eyes closed. I put 9 / 10 because I already tried the guitar perfectly and this is unfortunately not this one ... SG
See the source
Did you find this review helpful?yesno
Cookies help us improve performance, enhance user experience and deliver our services. By using our services, you agree to our use of cookies. Find out more.