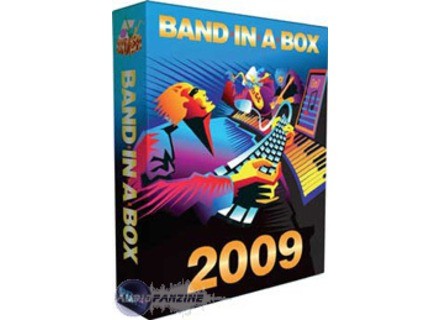 Band in a Box 2009, Software Arranger from PG Music in the Band In A Box series.

PG Music has released Band-in-a-Box 2009 which includes over 40 new features and enhancements.

PG Music added RealCharts for displaying the notation of most RealTracks, and enhancements have been made to the popular Audio Chord Wizard, RealTracks and RealDrums features.

New Features in Band-in-a-Box 2009 for Windows are:

* RealCharts. Most RealTracks now display notation showing the notes that are being played. Some Guitar RealTracks also show tab, and accurate on-screen fretboard guitar display to show what is being played on guitar. The RealCharts can be saved to MIDI file or Songs (MGU).
* Audio Chord Wizard Enhanced. Chords may be edited in the Audio Chord Wizard. Part markers, chord symbols, key signature, and tuning setting are saved in Band-in-a-Box, and are passed back and forth to the Chord Wizard.
* Artist Names and Bios for RealTracks. The RealTracks have been recorded by top studio musicians. Now the artist names and bios are displayed for the RealTracks.
* Freeze Song (for rapid playback). Un-Freeze Song. You can now freeze a song's arrangement. This converts the song to audio data that plays on the audio track, while the other tracks are muted. This insures that the song loads and plays quickly, without having to wait for RealTracks to generate. This feature is useful for people performing or in other situations where you are happy with the arrangement, and don't want to wait for several Real Tracks to generate. Even a long song with multiple RealTracks can now playback in a few seconds if you first freeze the arrangement.
* Melody Wizard. The QWERTY (or MIDI keyboard) Wizard has been enhanced. Now, for songs with melodies, there are QWERTY keys (Enter,'', T, 6) that trigger notes from the melody as the song is being played. Other keys trigger 1-4 approach notes from below or above. Can be recorded, to humanize a stiff melody with better timing, and approach notes also useful for sight reading, rhythm practice or to perform. Works with harmonies:

* RealTracks dialog improved with additional information.
* RealTracks Assign dialog has new columns with information for Stereo status, Set number, RealCharts status and artist name.
* RealTracks dialog can now list styles and demo songs that use the RealTracks. The Songs or Styles can be loaded in easily by menu, and played within the dialog.
* RealTracks improved arrangements.
* Ability to have a delay in RealTracks track programmed into a style.
* Ability to have a delay in RealTracks track programmed into a song. These allow you to make a song or style with a more 'laid-back' feel for a certain RealTracks for example.
* Better soloing and rhythm playing, that are influenced by the key signature as well as the chords.
* Better playing of slash chords in some situations.
* Option for a "Simpler" arrangement on some RealTracks, which avoid embellishments.
* Feature for fills, turnarounds, post fills and odd/even bars to be at the right place.
* Better playing on the "V" chord, since it is usually played as a V7 chord. Options added to allow a RealTrack to treat the V7 chord as a V (useful in rock styles), or to treat all 7th chords as major triads (useful in blues).
* Improved handling of CAug, CmAug, and C7+ chords.
* RealTracks: more fluid playing for complex (jazz) chords like C7b9b13.
* RealTracks shots improved.
* Improved RealDrums at certain tempos. When RealDrums are tempo-stretching, they now favour the speeding up a slower tempo more often, resulting in a better sounding Drums track. (Threshold changed from 10% to 4%).
* RealDrums Made By You (Or Others) that are added by you to the RealDrums folder now appear in the RealDrums Picker dialog.
* Improved Substitution Of RealDrums With Other RealDrums. When a song or style is loaded specifying a certain RealDrums, if you don't have the RealDrums, a substitution RealDrums will be intelligently selected using a similar style. A yellow hint message appears for a few seconds notifying you of the substitution (in Progress).
* Notation enhancement. Patch names displayed on notation, leadsheet and printout. Example: <57 trumpet>.
* StylePicker List Enhanced, with separate categories for RealTracks Genres (Jazz, Pop, Country, Bluegrass, Blues), over 1,000 entries.
* Save and Load Custom Preferences files, with your current settings saved and restored. For example, you can have a preferences that remembers a certain group of songs, notation transpositions etc. Return to Factory Settings now saves Preferences to disk, so that the settings can be restored at any time.
* MIDI Driver Dialog Enhanced. Audio Settings button displays the MME/ASIO/ASIO Always On status. Name of VST or DXi displayed
* Enhanced "Chords - Search And Replace" Functionality.
* Search and Replace can be used with Roman Numerals or numbers for chord names. You can replace the V chord with V7, or 5m chord to 5m7. Since these are remembered between songs, it is useful if you are changing multiple songs.
* Hotkeys Added in the menus. (e.g. Edit menu (search/replace, nudge, from to, fold).
* Easy Entry Of Section Text On Notation Window. Typing a backslash "" followed by any text puts that text at the beginning of the current bar as a boxed section text message. E.g. Hello would put "Hello" in a boxed section text event.
* Song Limit In Songpicker Increased from 10,000 to 25,000 songs.
* And more...

A Build 277 update is already available.

* Fixed: Rebuilding the stylepicker was generating some messages that had to be dismissed, when a few styles with invalid data were loaded.
* Improved: Generation of RealTracks when unusual chords encountered.
* Added: Flyby hints added for new items in dialogs.
* Added: Internalization support for other languages added.
* Improved: Tip suppressed when there is a RealChart on a Melody or Notation track.

* Fixed: Bug with Live Drums that caused some MIDI styles to play incorrectly.