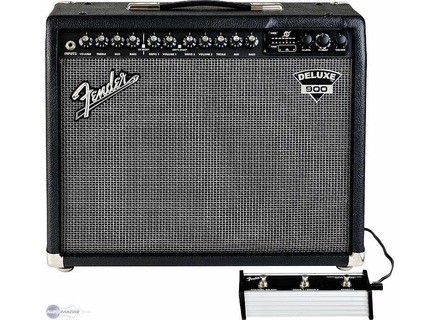 Value For Money : Excellent Audience: Advanced Users
View other reviews for this product:
This amp was produced from about 04 to 07 and was around $550 new....a bit expensive,but considering the Celestion G12T-100 speaker that really gives its great tone,I believe its worth it.The amp has the feel of a tube amp and the engineering proves it.The NU-B's comments whose inexperience playing electric amplifiers show,as this is an extremely advanced piece of equipment....and not meant for beginners.
Having played and owned many guitars and amps since 1968,this one is a keeper and I own 2 of them.The tube amp I believe that owns them all is the Fender Twin,whose clean is very similar to the Deluxe 900. Because of the twins weight,it sits at home as the Deluxe 900 is 33 pounds and is easy to pick up and go.
The great thing about the Deluxe 900 is the volume it has and will go from 0 to 60 in a blink of an eye and will blow the rocking chair right out from grandma 2 blocks down.The clean tone is unmatched,pure and sweet for any genre of music.
Most modeling amps with the various sounds are average compared to pedals and this is no exception,but this has parameter knobs that are decent and very helpful.I do use the reverb and delay on the Deluxe that are work well and have them on all the time.The drive 1 and 2 are very good as they can be set for a light crunch to an endless amount of gain with decent tone.Everyone likes a different distortion tone as do I and have a couple 3 pedal flavors to inter change when needed.Most solid state amps that distortion pedals are used with tend to sound fuzzy,buzzy and boxey.....but not on this ampas they sound very natural due in large to the sound of the Celestion speaker.
The tuner works well but I cant see it so I use a remote tuner attached to the head stock when playing which is right in the line of sight.
With the 2 channels,having an eq for each is excellent and very useful to sculpt your tone.The Timbre switch allows for different tones and I use the flat and bright most of the time...but tone is subjective and they are all there for the choosing.
Every amp has its own personality and this one fits mine just right...These can be picked up used for around 200 bucks,and when word gets out how versatile they are are,they will be hard to find...I cant stress enough how the Celestion speaker makes the amp sound so good....You might want to try one out...not just for an hour,but 6 months or so and you just might like it!...